Relatives of Irishmen who served in Royal Navy during WW1 sought 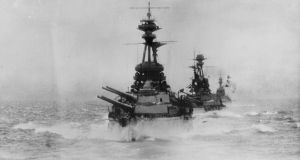 British ships in the Battle of Jutland on May 31st, 1916. Photograph: Express/Getty Images

Relatives of those Irishmen who served at sea during the first World War have been invited to share their stories in advance of the centenary of the Battle of Jutland.

At least 10,000 Irishmen, mostly from the south, served in the Royal Navy during the first World War.

Research carried out by naval historian Karen O’Rawe has found that at least 1,657 Irishmen died while serving with the Royal Navy, the Royal Navy Reserve or the Royal Marines during the first World War.

Of those, the largest number died at the Battle of Jutland on May 31st, 1916, the most important naval engagement of the war. It was also the largest naval battle in history between surface fleets.

The battle involved the British Grand Fleet and the German High Seas Fleet. Though the British lost more ships and more sailors at sea, some 6,000 in total, the battle was not decisive in changing Britain’s supremacy of the seas.

More than 350 Irishmen died in that encounter, among them were 96 from Co Cork, a county that had a strong affinity with the Royal Navy, 52 from Co Dublin, 72 from Co Antrim, 14 from Wexford and nine from Waterford.

An interactive map set up to mark the centenary of the battle with profiles of those who died include Seaman David Courtney from Courtmacsherry, Co Cork, Petty Officer Stephen King from the Claddagh in Galway and Stoker Christopher Creighton from Dublin, all lost at sea during the battle.

The Northern Executive and the Government is encouraging relatives of Irishmen who served at sea in the first World War to share their stories.

Thousands of men and women from Ireland were involved in the war at sea.

Commander John Gray, Northern Ireland’s senior naval officer, said it is often overlooked in Ireland, “but as an island nation, keeping the seas safe and the supplies flowing to feed the people of Britain and Ireland was vital”.

The centenary of the Battle of Jutland will coincide with the restoration of the only surviving battleship from the battle. The first World War light cruiser HMS Caroline was completed earlier this year. It will be located as a museum and conference venue at Belfast’s Titanic quarter and will open following a £14.5 million (€18.5 million) restoration.

History Hub Ulster is marking the centenary of the Battle of Jutland with the theme of the Irish sailor. Those interested in telling their relative’s stories can access the site at historyhubulster.co.uk/irishsailor.