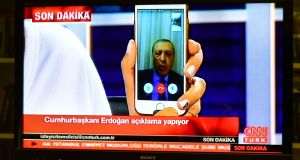 The abiding image of the failed military coup in Turkey last weekend was the sight of President Recep Tayyip Erdogan speaking to the country via iPhone, calling on citizens to take to the streets to protest against the military factions that had attempted to seize control.

It illustrated the way in which the plotters failed to control the narrative in the crucial early stages.

Coups need to convey a sense of swift success, leaving little time for hesitation as people decide whether to resist or acquiesce. Projecting inevitability is key. In the days of a limited number of broadcasters, controlling the narrative and projecting that inevitability was relatively straightforward.

While the coup leaders in the senior ranks of the military had hastily co-ordinated their plot over a WhatsApp group, they hadn’t shown much regard for how modern communications technology would curb their ambitions.

Within minutes of the coup commencing, Turkish people were taking to social media platforms and live-streaming video apps to express their opposition to the coup – despite an attempt by the military plotters to throttle social media access. It turns out that Erdogan’s tendency to limit internet access has made lots of Turkish people very adept at circumventing such controls.

The irony is all painfully rich, of course – Erdogan is no fan of public protest, free speech or unlimited expression on traditional or social media. During protests against his rule in 2013, he called Twitter “the worst menace to society”.

However, it is important not to imbue the technology that helped to stymie the coup with any intrinsic moral virtue – Twitter and Facebook and WhatsApp are factors in changing the climate in which coups can succeed, but they are not by their nature anti-coup or pro-democracy.