Q&A: Vulture funds and why they can act with virtual impunity

Up to 90,000 Irish loans are now owned by foreign investment funds 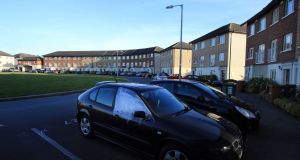 Sixty families have been told to leave their homes in Tyrrelstown in Dublin after the houses were sold to a Goldman Sachs vulture fund. Photograph: Nick Bradshaw.

Vulture fund – that sounds mean. They certainly can be. In recent years, private equity firms and hedge funds have bought up hundreds of millions of euro worth of distressed assets of both indigenous banks and foreign banks which set up in the Republic during the good times and fled when things got rough. These vulture funds buy loan books at heavy discounts and try to maximise their profits as fast as they can.

How do they do this? The funds typically (but not always) have little interest in developing relationships with a borrower – distressed or otherwise – and more interest in seeing a quick return on investments. If after a short correspondence with someone who has fallen behind in a loan or mortgage, a vulture fund cannot reach an agreement, they deem it to be unsustainable and trigger repossession or other court proceedings.

Who owns these vulture funds? They are not household names. Cerebus, Pepper, Lone Star Capital, Blackstone, Oaktree Capital, Starwood Capital and King Street Capital are among the companies involved.

But they have to adhere to the same rules as the main banks? No. The sector lacks the regulation of the banking sector and, while changes have been made in recent times, their international dimension and the absence of a high street (or any street) presence, as well as the fact they acquired rather than gave the loans, has allowed them to act with virtual impunity when dealing both with borrowers and with politicians who have tried to dig into what they are doing. Last July the law was changed to bring some – but not all – of the activities of the funds under Central Bank regulation.

Are there many people impacted? Yes. As many as 90,000 Irish loans are now owned by foreign investment funds. The largest tranche went into vulture funds when about 15,000 mortgages were sold as part of the liquidation of IBRC. This was made up of many loans that originated with Irish Nationwide Building Society. Bank of Scotland has also sold its loan book, while Bank of Ireland and Ulster Bank have sold portions of their non-performing loans to such funds.

Apart from the banks, who are selling loans to such funds? The vast majority of asset disposals by Nama – in the region of 90 per cent, in fact – have been to US vulture funds.

Should I be worried if I have a loan which is bought by a vulture fund? It depends on the fund and the nature of your loan. Some funds are said to be better to deal with than others.

The reality is that certain contractual terms and conditions exist which can not be changed just because a loan has changed hands.

And, under the legal changes rolled out last year, companies looking after such loans have had to set up credit service facilities which must to adhere to the codes of conduct which all banks must follow when dealing with borrowers.