Prince Charles completes ‘a pilgrimage of the heart’ 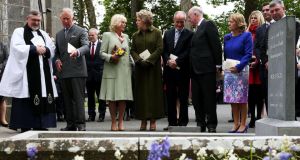 In the tiny church of Drumcliffe under bare Ben Bulben’s head, tributes were paid to many lives lost in conflict as Prince Charles and the Duchess of Cornwall participated in prayers for peace.

“A milestone moment” was how Bishop of Kilmore Rev Ferran Glenfield described the presence of the royal couple at yesterday’s ecumenical service, drawing “reconciliation out of wreckage”.

Relatives of those who had died in the bombing of Lord Mountbatten’s boat in Mullaghmore, and of some of the 18 soldiers killed in the Warrenpoint IRA bomb attacks in August 1979, were among the mixed-faith congregation.

Singing in a combined school choir was 17-year-old Bethany McLoughlin, whose grandfather Gerard McKinney was shot dead by paratroopers on Bloody Sunday.

The strains of O’Carolan’s Welcome, played by harpist Ramune Sakalauskaite, greeted the royal couple as they arrived at Drumcliffe after their visit to Lissadell House.

Former president Mary McAleese and her husband, Martin McAleese, and Minister for Foreign Affairs Charlie Flanagan joined them in the front pew, and Mrs McAleese gave the first reading from the Old Testament.

“For many years, wherever one went in Europe, Ireland was synonymous with violence, and that violence was often associated in people’s minds with religion,” Dr Doran said.

“Like the bullying in the schoolyard, there was an ugly display of power. Beneath the surface, however, there was a great deal of ignorance and fear. There was an apparent inability to recognise the other as a person like myself, often notwithstanding the reality of our common baptism,” he said.

Prayers were said, and a moment of silence held, for all those who had lost their lives in the Northern troubles, and Fr Pat Lombard remembered the late Lord Mountbatten and the family and friends of those who had died in Mullaghmore bay.

Prince Charles was introduced to Bethany McLoughlin after he and the Duchess of Cornwall planted a peace tree, and the royal couple were presented with a pen-and-ink drawing of the church by artist Annie West, before heading by road to Mullaghmore.

“Very intimate, spiritually enriching and uplifting,” Fr Laurence Cullen of Geevagh said afterwards, recalling how he had heard the news of the Mullaghmore bomb on the transistor radio at home in Sligo town in 1979.

Mr Flanagan said the service was “very poignant and moving”, while Mrs McAleese noted that “politics and history” would have precluded Prince Charles from dealing with grief by visiting Co Sligo after his great-uncle’s death.

“Now he has been able to come to do something which is undoubtedly a pilgrimage of the heart for him,” Mrs McAleese said.

“We all know what the past was like . . . it was not a pretty landscape,” Mrs McAleese said. “I think today something much more gracious and beautiful is let loose in the Irish air . . .”

The couple later attended Sligo Races. They continue their visit over the next two days in Northern Ireland.