Prince agrees to meeting after a request by Sinn Féin president

HRH Prince Charles and his wife the Duchess of Cornwall commence their 4 day Irish tour at NUI Galway. Prince Charles then visited the Marine Institute in Oranmore and the Burren in Co Clare. Video: Bryan O’Brien 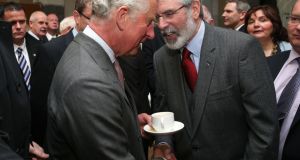 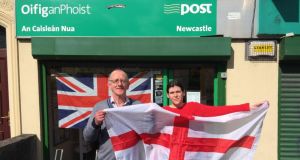 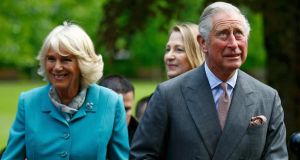 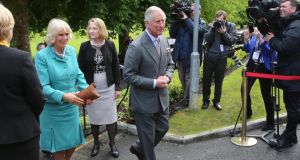 The royal couple are to meet politicians at the University as part of their visit. Photograph: EPA/Paul McErlane 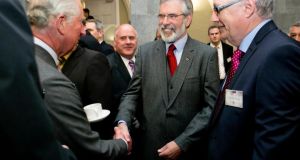 Sinn Féin president Gerry Adams has claimed he had a meeting of minds while talking to Prince Charles about lives lost in Northern Ireland’s 30-year conflict.

Mr Adams said the two men expressed regrets over deaths in the Troubles and spoke about the 1979 IRA bombing, in which the prince's great-uncle Lord Mountbatten was murdered, and other atrocities.
“Both he and we expressed our regret for what happened from 1968 onwards,” Mr Adams said.
“We were of a common mind and the fact that the meeting took place, it obviously was a big thing for him to do and a big thing for us to do.”

Prince Charles shook hands with Sinn Féin president Gerry Adams at lunchtime on Tuesday after a historic first meeting between a British royal and the party president.

Mr Adams described their 30-second handshake and chat at NUI Galway as “a symbol” of the progress that has been made since the prince’s first visit to Ireland in 1995.

The Sinn Féin president later held a private meeting with the heir to the British throne.

Mr Adams said: “Today’s meeting with Prince Charles is a significant symbolic and practical step forward in the process of healing and reconciliation arising from the peace process.

“He and his family were hurt and suffered great loss by the actions of Irish republicans. I am very conscious of this and of the sad loss of the Maxwell family, whose son Paul was killed at Mullaghmore, and I thank all involved, including Charles, for their forbearance,” he said.

The handshake represents the first meeting in the Republic of a member of the British royal family with Sinn Féin since partition, and comes three years after Sinn Féin Deputy First Minister Martin McGuinness shook hands with Queen Elizabeth in Belfast’s Lyric Theatre.

Prince Charles agreed to the meeting after a request by the Sinn Féin president.

Prince Charles and the Duchess of Cornwall had been greeted at the university by Tánaiste Joan Burton and Minister for Heritage and Arts Heather Humphreys at lunchtime on Tuesday.

The duchess was presented with a bouquet of English roses before the royal couple were led into a marquee exhibiting the best of local Irish arts, crafts and culture.

After being introduced to exhibitors by Niall Gibbons, chief executive of Tourism Ireland, the royal couple were presented with a woolen blanket and, much to their amusement, a willow-woven rattle “for the newborn” Princess Charlotte.

Basket weaver Ciaran Hogan, who gave the gift of the rattle, said it prompted a laugh from the royals and Prince Charles “gave it a rattle” to test it out.

The prince, in his first speech of his four-day visit to both sides of the Border, told the crowd of dignitaries and politicians that it was a “very great pleasure” to be in Galway, and prefaced his remarks with the Gaelic greeting “a dhaoine uaisle”.

The prince admitted he “may be a little too old to learn the steps of the Irish dancing routine”, and said that “having been an admirer of Fred Astaire ever since I can remember, it would be marvellous if I could”.

“Having first had the privilege of coming to Ireland in 1995 and then again in 2002, each time I have been so overwhelmed and so deeply touched by the extraordinary kindness, the welcome and indeed the fun of being in Ireland.

“Apart from anything else, the chance of plenty of good jokes and laughter make the whole difference to life.”

On Tuesday afternoon, Taoiseach Enda Kenny and Minister for Marine Simon Coveney welcomed Prince Charles to the Marine Institute on the southern shores of Galway Bay.

Prince Charles, who established the International Sustainability Unit in 2010, had expressed a particular interest in visiting the State’s marine research headquarters en route to the Burren in Co Clare.

Prince Charles was introduced to University College Cork professor of geology Dr Andrew Wheeler, who spoke about the results of a British-Irish expedition to the mid-Atlantic ridge in 2011.

Dr Wheeler explained how the expedition led to the discovery of the Moytirra Vents, a previously uncharted field of hydrothermal vents some three miles below the sea surface on the mid-Atlantic ridge.

The survey took place on the Marine Institute’s research vessel RV Celtic Explorer and involved Irish and British scientists from University College Cork, the National Oceanography Centre and the University of Southampton, he said.

Dr Wheeler presented Prince Charles with a 330 million-year-old piece of fossil coral from Streedagh, near Mullaghmore in Co Sligo.

Outside, he was shown a remotely operated vehicle and data buoy and glider by Mr Mick Gillooly and colleagues.

Prince Charles was also briefed by Mr Coveney and Dr Heffernan on the first transatlantic mapping survey to take place under the Atlantic Ocean Research Alliance between the EU, Canada and US.

The Irish-led survey will begin early in June when the RV Celtic Explorer sails from St John’s Newfoundland to Galway.

Earlier, crowds gathered at the entrance to NUI Galway, along with several protest groups, including members of the Socialist Workers’ Party for the visit by the British royal party.

One protester carried a placard reading “Joe McCann – murdered by 1 (one) Para 15/4/72” - referring to the killing of IRA volunteer Joe McCann in Belfast in 1972. Prince Charles is commander-in-chief of the British Parachute Regiment.

Welcoming the Prince of Wales and Duchess of Cornwall to NUIG, the Tánaiste referred to the links forged by the university with many British partners and students and described it as a “microcosm of today’s relationship between Ireland and Britain”.

Ms Burton, who was accompanied by Minister for Arts Heather Humphreys, said the relationship between the two islands had been “greatly strengthened by the prince’s earlier visits and the historic exchange of State visits in 2011 and 2014”.

“The prince has always placed great emphasis on peace and reconciliation – all the more moving when a person has suffered great personal anguish and loss,” Ms Burton said.

“On this, his third official visit here, those themes will once again come to the fore on the coast of Sligo and in Northern Ireland later this week,” she said.

Ms Burton quoted late Nobel laureate Seamus Heaney, writer and cartographer Tim Robinson and poet Mairtín Ó Direáin as she spoke of the significance of the visit to the west coast, including the Burren, Co Clare on Tuesday afternoon.

Prince Charles planted a tree behind the Quadrangle on the university campus, and visited the Marine Institute en route to the Burren.

Later, the Duchess of Cornwall met students at Claddagh National School and visited the Druid Theatre before experiencing a presentation of food associated with the Wild Atlantic Way driving route in the House Hotel in Galway city.

Ms Hynes said: “We were delighted to welcome the Prince and Duchess here to Shannon and it was another very important day for us at the airport. Prince Charles was very relaxed and was looking forward to his visit.”

Prince Charles also noted in the conversation his desire to see the Burren, she said.

The couple will attend a private dinner with President Michael D Higgins and his wife Sabina at Lough Cutra Castle, Co Galway, on Tuesday evening.

On Wednesday, Lissadell House is part of the couple’s itinerary in Sligo, which begins with a civic reception and a viewing of the Niland Art Collection at the Model contemporary arts centre in Sligo town.

Former Sinn Féín mayor of Sligo Seán McManus, whose son Joseph was killed in a gun battle with security forces in the North in 1992, will attend the function.

Prince Charles will visit the Sligo Institute of Technology and the couple will have lunch at Lissadell. They will visit the grave of poet WB Yeats and attend an ecumenical service in St Columba’s Church in Drumcliffe.

An initial proposal to unveil a plaque at the church in memory of the prince’s great-uncle, Lord Mountbatten, who died off Mullaghmore in an IRA bombing almost 36 years ago, has been abandoned.

Commenting on behalf of Prince Charles, Clarence House said “a number of ideas were discussed when the programme was being put together, including a plaque”, but it understood the local community suggested a tree-planting and Clarence House was happy to agree with this.

The tree would be planted at the church by the couple, it said, and an accompanying plaque would “not reference Lord Mountbatten”, as the church service was on the theme of peace and reconciliation.

The couple will then be taken to Mullaghmore Harbour and will conclude their day with a visit to Sligo races. They will travel to Northern Ireland for engagements on Thursday and Friday.

Gardaí have have put “high” security measures in place for this week’s visit. The threat level from dissident republicans is pitched at “moderate” and there is “no specific intelligence” on threats, a Garda spokesman said.

“We are not taking any chances,” he said.