The British royal couple will visit the grave of poet WB Yeats, NUIG, and the Burren 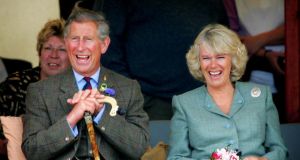 Security restrictions will be in place for the campus tour, where they will meet students, plant a tree and attend a reception celebrating links with Britain and Irish crafts, music and dance.

NUIG, which is live-streaming the visit on the internet, said the visit will also focus on key research areas, including Irish language and Celtic studies, biomedical science and engineering, environment, marine and energy,social science, informatics, data analytics, physical and computational sciences and the humanities.

The couple will then split for separate engagements, with Prince Charles travelling around the bay to the Marine Institute in Oranmore and then to the Burren in Co Clare.

Prince Charles has a particular interest in the marine, the environment and in organic farming practices, as reflected in the so-called “black spider” letters he wrote to British government ministers serving under then-prime minister Tony Blair between 2004 and 2005, which were published last week.

The Duchess of Cornwall will visit the Claddagh National School in Galway where she will talk to students involved in the Suas literacy programme before joining a school assembly.

She will also attend a reception at the Mick Lally Theatre to mark the Druid theatre company’s 40th anniversary, and a brief performance will be staged for her.

“Royal”themes of power, sovereignty, loyalty and betrayal are reflected in the theatre company’s new production of DruidShakespeare, written by Mark O’Rowe and directed by Garry Hynes, which opened in Galway at the weekend (sat 16).

Ms Parker Bowles will attend an event celebrating “regional food and drink from the Wild Atlantic Way” at the House Hotel, before leaving the city.

The couple will attend a private dinner with President Michael D Higgins and his wife Sabina at Lough Cutra Castle,Co Galway, on Tuesday evening.

The couple will travel to Sligo for a series of events on Wednesday, including a civic reception and a viewing of the Niland Art Collection at the Model contemporary arts centre.

Prince Charles will visit the Sligo Institute of Technology and the couple will attend a service of peace and reconciliation at Drumcliffe Church, where they will also visit the grave of poet WB Yeats and will plant a tree.

The couple will then be taken to Mullaghmore harbour, where the prince’s great-uncle Lord Louis Mountbatten died in an IRA bombing almost 36 years ago.

Lord Mountbatten (79), who took holidays each summer at Classiebawn Castle near Mullaghmore harbour, had embarked on a lobster-potting and angling expedition on August 27th, 1979, when a bomb on board detonated just a few hundred yards from the harbour.

Mountbatten died of his injuries, as did his grandson Nicholas Knatchbull (14), Paul Maxwell (15), from Co Fermanagh, and Lady Brabourne (83), his eldest daughter’s mother-in-law. Nicholas Knatchbull’s parents and twin brother, Timothy, survived, but with serious injuries.

Thomas McMahon of Carrickmacross, Co Monaghan, was convicted of the bombing, which the IRA claimed responsibility for, and was sentenced to life imprisonment.

He was released in 1998 under the terms of the Belfast Agreement.

The couple will conclude their day with a visit to the Sligo Races, and will then travel to Northern Ireland for a two-day itinerary on Thursday and Friday.

Prince Charles will meet community organisations on Thursday at East Belfast Community Development Association and the Duchess of Cornwall will attend a reception for supporters of The Big Lunch, which she is patron of, and will also visit Ballyhackamore Credit Union.

They will attend a reception and concert at Hillsborough Castle on Thursday night, and will spend Friday at Mount Stewart gardens and Corrymeela peace and reconciliation organisation.

His second official visit here, in 2002, had scheduled a trip to the Burren, Co Clare, but this part of the itinerary was cancelled due to the death of his aunt, Princess Margaret.

Prince Charles and the Duchess of Cornwall visited Northern Ireland in June 2013, and April, 2014.

It has been welcomed by Minister for Foreign Affairs Charlie Flanagan, and by Sinn Féin leader Gerry Adams, who said last month that he was “conscious that Prince Charles is the symbolic head of the British army’s Parachute Regiment” and referred to “the grievous wrong they have done, including to the people of Derry and Ballymurphy where I grew up”.

“However I am also conscious that the British royal family have also been directly affected by the actions of republicans,”Mr Adams said, and expressed the hope that the visit would be “an occasion to promote reconciliation, respect and understanding”.

1 Coronavirus claims one more life while 11 new cases reported in Republic
2 Covid-19: Travel restrictions to stay and 'green list' put on hold amid fears of second wave
3 Rare whale dies after getting into distress in Wicklow Harbour
4 Bobby Storey: The IRA's planner and enforcer who stayed in the shadows
5 Taoiseach ‘disappointed’ he only learned of Barry Cowen’s driving ban on Friday
Real news has value SUBSCRIBE