Priest tells mourners ‘the violence is now at our own door’ 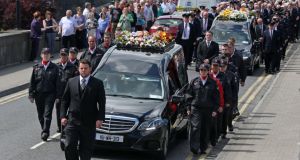 The funeral of Larry and Martina Hayes leaves the Church of St Peter & Pauls, Athlone for the cemetary. Photograph: Collins

The murderous ideology of Islamic State visited Athlone in a visceral way, the mourners at the funerals of Larry (Lonnie) and Martina Hayes, who died in last week’s deadly attack were told. Two hearses outside a church bore testimony to the hatred which seemed so far away last week and is now so close.

The images on television screens in dusty parts of the Middle East were “sanitised and sterilised,” Fr Liam Devine told the congregation. “The violence is now at our own door.”

A guard of honour from Mr Hayes’s work colleagues at Bus Éireann and another from their daughter Sinéad’s fellow volunteers in the Order of Malta accompanied the funeral procession.

As the hearses crossed the river Shannon to their final resting place in Coosan Cemetery, the town of Athlone came to a standstill.

The couple’s murder by Seifeddine Rezgui, who killed 38 tourists in a beach resort in Tunisia last week, left the Hayes’s only child Sinéad without a mother or father. The day of her parents’ funeral was also her birthday.

The hearse carrying her father’s remains had a photograph of the three of them in happy times.

“It is impossible to get inside the mind of someone who would carry out such an abominable act of violence. We cannot judge people like that by our values and standards,” Fr Devine said. Violence solved nothing. It was simply “evil”.

‘Peace be upon you’

Michael Hayes uttered the Arabic words “as-salamu alaykum” (peace be upon you) in his tribute to his brother and sister-in-law. The Muslim community in Ireland was represented by Shaykh Umar Al Qadri from the Irish Muslim Council.

The imposing Church of St Peter and St Paul was full to its 2,000 capacity for the funeral.

The congregation heard of a couple who were “soulmates”. Both were the youngest in their respective families, he was one of five, she was one of 11.

They went everywhere together, tended to their strawberries and flowers and kept a house so neat and tidy that no fingerprints could be found in it for identification purposes.

The funeral of Lorna Carty who was also killed in the Tunisian attacks takes place at noon today in the Church of the Assumption, Robinstown, Co Meath.

Man found guilty of murder of Ciara Glennon and second woman in 1990s 22:00
Traffic figures for Dublin ‘slightly down’ on pre-Level 3 restrictions 21:52
HSE may facilitate virtual role for partners at key maternity moments 21:49
No deadline set for restoration of Shelbourne Four statues 21:44
People leaving Catholic church because they are tired of ‘little old men’ - McAleese 21:44

1 Donegal to move to Level 3 Covid-19 restrictions, Taoiseach confirms
2 Covid-19: Three more deaths and 324 new cases in State as ‘green list’ of countries reduced
3 Covid-19 Q&A: How are we doing now and is there any good news?
4 Mother refused meaningful access to teenage daughter in ‘profoundly sad’ case
5 Coveney to visit US next week amid heightened concerns over Brexit
Real news has value SUBSCRIBE