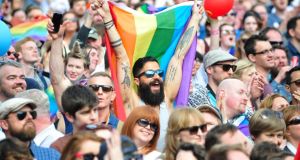 People react to results coming in from constituencies around Ireland indicating an overwhelming majority voting in favour of same-sex marriage. Photograph: EPA/Aidan Crawley

President Michael D Higgins has welcomed the high turnout for voting in this week’s referendums, and the “grace” with which campaigns on both sides were fought.

Speaking in Galway city as counts continued across the State, Mr Higgins described the turnout as “massive”.

He said that, as President, he was precluded from commenting on the outcome of the two referendums on same sex-marriage and reduction of the age eligibility for presidential candidates.

However, he told The Irish Times that he was “very happy that so many people participated”.

“It’s a very good thing when the citizens come out and express their opinions,”Mr Higgins said.

“Also, I think we will all be very pleased with the grace with which people have responded to each other’s position, as it looks likely that there’s an outcome of a particular kind,” he said.

“And particularly, everyone must be very pleased at the involvement of young people,”Mr Higgins said.

Mr Higgins was in Galway to mark the 75th anniversary of Our Lady’s Boys Club in Sea Road and to open its new clubhouse.

Mr Higgins, who was accompanied by his wife Sabina, greeted Bishop of Galway Dr Martin Drennan at the function, which was attended by a number of politicians and past and current members of the club.

He particularly noted how young people had travelled around the country to “to put a single mark” on a ballot paper, something that demonstrated the value of the issue at hand.

Elsewhere, senior politicians welcomed the the result, with Minister for Health Leo Varadkar saying the overwhelming Yes vote makes Ireland a “beacon of light” for the rest of the world in terms of liberty and equality.

“It’s a historical day for Ireland,” he told RTÉ, adding that if any constituencies voted No, it would only be a handful.

BeLonG To, a group that works with lesbian, gay, bisexual and transgender young people,said the result would change forever what it meant to grow up LGBT in Ireland.

“The Irish people, via the ballot box, have today given each and every gay child and young person in Ireland - and across the world - a strong and powerful message that they are loved, they are cared for, and don’t need to change who they are,” said Michael Barron, the organisation’s founding director.

Tanya Ward, chief executive of the Children’s Rights Alliance, said the vote was a signal to LGBT children “that they matter, they’re valued and that Ireland cares”.

Ann Louise Gilligan, who with her partner Senator Katherine Zappone fought an unsuccessful battle in the Irish courts to have their Canadian marriage recognised by the State, said she was “feeling emotional from the top all the way down to my toes”.

“We are continuing our efforts, but together with the whole of Ireland,” she said as she stood alongside Senator Zappone in Dublin Castle. “This has saved us from prejudice. Today we are free.”

Ms Zappone, originally from Washington state in the United States, arrived in Ireland with Ms Gilligan in 1983 and went on to become a chief executive of the National Women’s Council of Ireland and a human rights commissioner.

The Irish Congress of Trade Unions welcomed the result and paid tribute to the many trade unions and activists “who were in the forefront of this drive for a more equal Ireland”.

Congress general secretary Patricia King said its strong commitment to the Yes side reflected its role “achieving greater fairness and justice over many decades.”

“Ten years ago Ireland was still a very dark place,” said former minister Pat Carey, who waited until his late 60s to open up about being gay. “There was a lot of raw wounds that needed to be healed. I think the young people of Ireland have grabbed this country by the neck and it’s unrecognisable to what it was 10 years ago.”

Archbishop Diarmuid Martin said it was now time to focus on other myriad inequalities in Irish society.

“I have the strong belief - there is a strong belief in the church - about the nature of marriage and the family,” he said, after the result was beyond dispute.

“I would like to have seen that the rights of gay and lesbian men and women could have been respected without changing the definition of marriage. That hasn’t happened but that is the world we live in today.”

The eyes of the world too have been trained on Ireland hoping to carry the first popular vote on same-sex marriage. The story has featured prominently in international media today.

The Iona Institute issued a statement congratulating the Yes side “on their win” which they described as “a handsome victory”.

“We hope the Government will address the concerns voters on the No side have about the implications for freedom of religion and freedom of conscience,” it concluded.

No campaigner Senator Ronán Mullen said he was not surprised by the seemingly “very substantial majority” in the Yes vote but remains concerned about changes to the Constitution and its negative impacts.

Nobody in the No campaign thought it was going to be easy, he said.

“We are operating in a political time and place in Irish culture”, up against a very skilled Yes campaign which had the support of all political parties.