Premiere of choral work with 1,000 voices at Rising commemoration 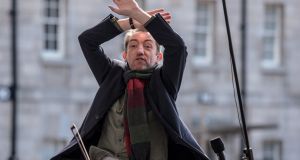 One Hundred Years a Nation, a new orchestral and choral work to mark the centenary of the Easter Rising has received its world premiere.

Thousands of people including President Michael D Higgins were present in Collins Barracks in Dublin for the premiere of the joint work by composer Shaun Davey with text by poet Paul Muldoon.

Muldoon previewed some of the lyrics in The Irish Times recently. The poem is a history of Ireland over the past 100 years and is quite political in intent. He mentions the Easter Rising, but then writes about “throwing off the English yoke. We then submitted to the choke-hold of the Holy Romans”. He references “gombeen financiers”, “ghost estates”, “boarded-up towns” and “still marked mass emigration”. He also sets his face against fracking and urges the Irish not to “ape the despoilment we struggled to escape for so many centuries”.

The concert, entitled A Nation’s Voice, was presented by the Arts Council and RTÉ, in association with the National Museum of Ireland, the Association of Irish Choirs and Music Generation, as part of Ireland 2016.

It featured 1,000 voices from 31 choirs, with the RTÉ National Symphony Orchestra and conductor David Brophy. Some of the choirs, with singers ranging in age 8-85, were formed especially for the occasion.