Plan for Tuam site should not be up to coroner, says ex-mayor 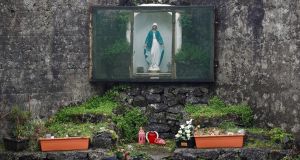 Shrine on part of the site of the former Mother and Baby home in Tuam. “Exhumation would cause a lot of upset.” Photograph: Peter Nicholls/Reuters

The decision on the future of the Tuam Mother and Baby Home burial site is “too big” for the coroner to make on his own, former Galway county mayor Peter Roche has said.

The Fine Gael councillor also says there should be no exhumation at the site. He has suggested instead that the site where up to 800 infants may be buried should be dedicated in their name, but that there should be widespread consultation with affected families and other stakeholders before any final decision is taken.

Cllr Roche told The Irish Times he believes Archbishop of Tuam Dr Michael Neary “may have been premature” in suggesting reinterment, given certain views about the role of the Catholic Church.

“It is also regrettable that the coroner has been charged as the only person who can take the next step,” Cllr Roche said. “It shouldn’t be left to him when there are so many people whose views need to be taken into account.

“Exhumation would cause a lot of upset, it may be impossible to ensure everyone is accounted for, and local residents have been maintaining this location in memory of these little souls for many years,” he said. “A mass commemoration in their honour would provide a lasting legacy.”

Independent TD for Galway West Catherine Connolly criticised Cllr Roche, and said she felt it was “utterly premature to be consecrating the ground”.

“This is an insult, when what families deserve is maximum information,” she said. “We need immediate publication of the commission’s interim report on Tuam, and this will help determine where we are going.”

A week ago when the commission revealed its findings of test excavations on the Tuam site, it said Galway County Council would engage with it in relation to immediate next steps. The county council said it was engaging directly with local residents but was also awaiting a decision on what to do next from the coroner.

The north Galway coroner Dr Val Costello, who has legal responsibility for investigating sudden, unexplained and unnatural deaths, has so far made no public comment since confirmation a week ago from the Commission of Investigation into Mother and Baby Homes that “significant” remains had been found on the site of the Tuam Mother and Baby Home, which closed in 1961.

The excavations identified a decommissioned sewage containment system or septic tank, and a second structure, divided into 20 chambers,which may have been related to sewage treatment, but there was no evidence it had been used as such. The commission’s report only refers to remains being found in the second structure.

It is open to the coroner to call on the support of the Garda and any other authorities deemed necessary.

Tusla has confirmed that all records it has about the Mother and Baby Home in Tuam have been given to the Commission of Investigation.