Picture of Thomas Clarke as baby withdrawn from sale 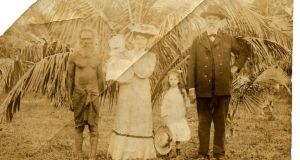 Thomas Clarke as an infant with his family and a tribesman in the Cape of Good Hope.

A photograph of Thomas Clarke – the first signatory of the 1916 Proclamation – as a baby in Africa in 1859 has come to light.

The image shows one of the future leaders of Ireland’s Easter Rising as a baby in his mother’s arms with his British Army father, a young girl and an African tribesman in the Cape of Good Hope – then a British colony, now part of South Africa.

The photograph was consigned to an auction of historical memorabilia at Adam’s in Dublin yesterday, but was withdrawn from the sale at the request of the vendor.

Clarke went to Africa with his parents James and Mary.

Both children are wearing female dress, as was customary during the Victorian era.

Thomas Clarke’s father James was born in Co Leitrim in 1830 and enlisted in the British Army’s Royal Artillery regiment in the Famine year of 1847. After duty in Ireland – including a spell in Clonmel, Co Tipperary where he met his future wife Mary Palmer – he was posted to the Crimea where he fought at the battles of Alma and Inkerman and the siege of Sebastopol.

James and Mary married in 1857, when he was stationed in Hampshire, and Thomas was born a year later. Clarke was then posted to South Africa, where he served at the Cape and other garrisons until 1865. The family returned to Ireland and lived in Dungannon, Co Tyrone where the future rebel grew up.