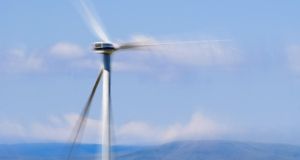 The wind turbines would be visible from land, with the nearest shore point 1.27km away 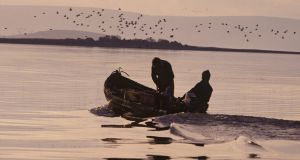 The Marine Institute is seeking permission to install three 60m-high wind turbines within Galway Bay as part of an application to build a trial offshore electricity generating station.

The wind turbines will be half the height of Dublin’s Spire, while proposed test generating station will cover 37 hectares of the bay - some 30 times the size of Croke Park.

The €1 million Government-funded project is designed for “scaled ocean energy prototypes” for a period of “up to 35 years”.

It will be located at the existing ocean energy test site off Spiddal, Co Galway, which the Marine Institute had held the lease for since 2006, and it involves the Sustainable Energy Authority of Ireland.

The project will be visible from land, with the nearest shore point being just 1.27km away, and within 3.6km of the Connemara Bog Complex special area of conservation.

The Marine Institute said that the statutory four-week public consultation on the project will be initiated on April 18th.

It says that licence application submitted to the Department of the Environment aims to renew the existing licence held on the marine and renewable energy test site off Spiddal, and to upgrade it.

The upgrade would “allow for the testing of a wider range of quarter scale marine renewable energy devices -including, potentially, wind turbines - and innovative marine technologies and sensors”.

The upgrade involves a “sea-station” to provide power to, and from, ocean energy devices, buoys, a data buoy, a “monopile” support structure, scientific sensors and instruments, cables and cardinal marks to allow for safe navigation.

It says that the temporary nature of the installations for the devices will be an “important ameliorating factor”, and it will be “uncommon for all of the structures ot be in place at any one time”.

The quarter-scale marine test site off Spiddal is managed by SmartBay Ireland, which installed a sub-sea cable last year which was part-funded by several State agencies.

The foreshore lease application says that noise will be limited to “ambient background” sound in a “coastal marine environment”, and its impact will be one of “visual intrusion” rather than “visual obstruction”.

However, local residents have pointed out that that a 35-year-lease suggests that the site could be sub-let to a private operator- similar to Bord Iascaigh Mhara’s original plan for a 15,000 tonne fish farm in the bay.

The BIM fish farm licence application for a project which would have been further out the bay off the Aran island of Inis Oírr has been withdrawn and is under review.

In a bilingual leaflet, the Marine Institute says that Galway Bay aims to become a “national centre of excellence for the marine technology sector”.

Foreshore lease applications are submitted to a marine license vetting committee - which can involve the Marine Institute - for assessment, prior to ministerial approval. There is no appeal system under the existing legislation.