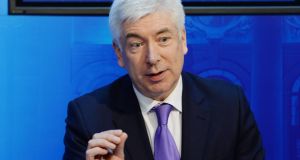 Minister of State for Primary Care Alex White said the debate was important at a time when Ireland was trying to refrom its health services.

People with mental health issues are waiting 10 years on average between the onset of symptoms and effective intervention, a national conference on mental health heard yesterday.

Prof Lucey was addressing the Mental Health Conference 2013 which was held in conjunction with the National Primary Care conference which took place in Newbridge in Co Kildare yesterday.

He cited an RCSI study of 212 young people from North City Dublin which showed that almost three quarters of the 19-34 year-olds involved in the study who had a mental health disorder, were not in treatment at the time the research was carried out.

“There is a mismatch that has to be addressed given that we know what we know about youth mental health,” he said, adding that the bulk of adult mental health disorders emerged in youth.

Prof Lucey said better mental health in youth builds lifelong cognitive resilience in our young people and that therefore be adolescent mental health needs to be addressed as a priority.

Meanwhile Paul Kelly, founder and CEO of Console, who was speaking about regional suicide trends in Ireland, told the conference that some 45,000 people are impacted by suicide in Ireland annually based on the estimate that at least six people will suffer intense grief, 13 to 30 will experience moderate grief while over 50 people will experience strong emotions following a suicide.

The National Primary Care conference, which was held simultaneously, heard from the Minister of State for Primary Care, Alex White who said the event was a very important forum for debate at a time where Ireland was on a “journey...to reform our health care system and to ensure that the changes we implement will result in the kind of sustainable, efficient and effective health care system that we want to have”.

“The decisions we make now will determine the health and wellbeing of Irish society for years and for decades to come.”

He said the Government’s intention was for the “development of a single-tier health care system where access is based on medical need and not on ability to pay”, adding that a white paper on a system of universal health insurance would be available by the end of the year.