‘Our anguish at the sudden loss of Anthony is bottomless’

Family says it has ‘lost an amazing, adoring and loving father and husband; an equally caring, loyal and devoted son and brother’ 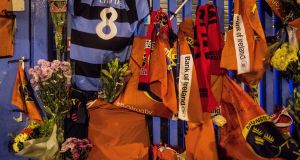 Anthony Foley’s family has said their anguish at his sudden loss is bottomless and has plunged them into an “incomprehensible darkness and sense of loss”.

In a brief statement issued at lunchtime the Foley and Hogan families said “with Anthony’s passing, we have ultimately lost an amazing, adoring and loving father and husband; an equally caring, loyal and devoted son and brother; a central and go-to figure.”

“Our anguish at the sudden loss of Anthony is bottomless. We have been plunged deep into an incomprehensible darkness and sense of loss that we must work our way through over the coming days, weeks, months and years.

“We know, too, that his sudden death has brought the rugby worlds of Shannon RFC, Munster, Ireland and much further afield crashing down. You have lost a former player, coach, friend and all-round inspiration - your and our hero both.

“We mourn his loss together. We again wish to thank everyone for their support; it will help carry us through these darkest days.

“With regard to media, we thank you also for the sensitive way in which you have paid tribute to Anthony since the weekend but we do ask that our privacy and that of his close friends be respected over this tragic period.”

“As a result, the Foley/Hogan families will not be available to media at this sad time and have asked that the wishes of the wider community be respected also.

The statement said because Foley had died in Paris the funeral have yet to be finalised.

Rugby fans and members of the public are paying personal tributes to the former Ireland and Munster star. Foley also captained his province to their breakthrough Heineken Cup triumph in 2006.

As messages of sympathy flooded in from across the world of sport and further afield, books of condolence were being opened across Munster and Irish flags were lowered to half-mast.

David Corkery, former Munster and Ireland player, said he was shocked at the sudden death of Foley.

“It’s one of those days that everything is a blur, everything is a haze at the moment, don’t know whether coming or going. When the news came through yesterday, for me it was like being hit with a sledgehammer - immediately the questions that you have in life, ring out, why him, why not me, why not a lesser being, a lesser person, someone without kids. It’s hard,” he said.

Corkery said he had grown up with Foley from school level and were “arch rivals”.

“On numerous occasions I roomed with the guy. It’s just mind boggling. To see how something like this can happen, it poses the question is there a God? Is there someone up there? If there is why would he take somebody like Anthony at such a young age with a young family, and his whole life ahead of him. It’s just hard,” he said.

Coronavirus: ‘Last time I saw her was when she was put into the ambulance’ 16:34
Coronavirus: ‘We are not here to go and hide in the Garda Station’ 16:06
Volunteers use online forum to mind children of healthcare workers 15:53
Coronavirus: Man who allegedly spat at garda brought to court by gardaí in protective gear 15:44
Irish flight bringing PPE from China arrives in Dublin 16:37