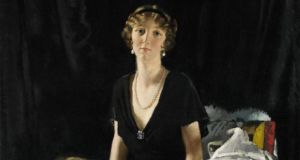 Lady Idina Wallace (1893-1955) was married five times and was immortalised as “The Bolter” by novelist Nancy Mitford.

One of the most significant paintings by Irish artist Sir William Orpen is to auctioned at Sotheby’s in London later today.

A Portrait of Lady Idina Wallace is described by Sotheby’s expert Simon Toll as “the most important full-length portrait by the artist to come to auction in over 10 years”.

It is one of a series of portraits the artist painted of well-known aristocratic women at the pinnacle of London high-society on the eve of the first World War.

Lady Idina Wallace (1893-1955) was the daughter of the 8th Earl de la Warr, who had earned the nickname “Naughty Gilbert” after running away with a can-can dancer. She inherited her father’s hedonistic spirit and became, according to Sotheby’s, a “woman who scandalised a generation”. She was married five times and was immortalised as “The Bolter” by novelist Nancy Mitford.

The portrait dates from 1915 when she was married to her first husband, Capt David Euan Wallace of the Life Guards. However, it was commissioned, not by him, but by Sir James Harriet Dunn, a married millionaire industrialist and financier who was smitten by her and who paid the then exorbitant sum for the portrait. She is depicted wearing a black evening gown and casting off her fur-hooded satin opera-cloak. At her feet is her jet black Pekinese called ‘Satan’.

A decade later, she had moved to Kenya and married - her third husband - Josselyn Hay, the 22nd Earl of Erroll in 1923. They were central figures among the hedonistic colonial elite of British East Africa, known as ‘The Happy Valley Set’. They divorced seven years later and he was later murdered near Nairobi in 1941. The case, which shocked the entire British Empire and was depicted in the 1987 film White Mischief, is still unsolved.

The record price for a painting by Sir William Orpen (1878-1931) was achieved at Sotheby’s in 2001 when his Portrait Of Gardenia St George With Riding Crop sold for £1.9m (€2.24m) to an anonymous American collector who outbid the Canadian billionaire and owner of the Brown Thomas department stores, Galen Weston.