Organisers hope up to 10,000 will attend anti-austerity march 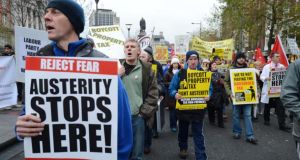 Organisers of the planned anti-austerity march on Saturday week (October12th) are hoping that up to 10,000 people to participate.

The march is being organised by the Dublin Council of Trade Unions and a number of leading trade union leaders on Tuesday urged members to attend the event.

Siptu president Jack O’Connor said the march was part of a democratic exercise to to persudade people who hold office in the country that “the route they are on is the wrongroute they are on even from the point of the achieving the troika targets”.

He said the demonstration was on foot of a number of trade union demands in relation to the forthcoming budget. He called on the Government to introduce a budget that “ does maximum possible to promote the domestic economy and domestic demand.”

He said this was the only way the country could get to the 3 per cent target deficit envisaged in the troika agreement.

Unite regional secretary Jimmy Kelly said there was an alternative to austerity and it was time to stop further cuts.

He also maintained that the march on October 12th should be aimed at showing solidarity with secondary teachers in the ASTI trade union which has rejected the Haddington Road agreement and are to embark on industrial action from Wednesday.

“They can’t be lined up and treated like lepers and treated in a way that tries to destroy their organisation. they are entitled to make a decision in relation to the Haddington Road proposals. We should be defending their decision. Unions who voted in favour of Hadington Roads should be against the imposition of the emergency legislation to inflict any damange on members of the ASTI.”

The general secretary of the CPSU union Eoin Ronayne said ordinary workers had nothing to fear from the introduction of a new higher tax band.

“Budget 2014 is an opportunity for Government to put ordinary citizens first, rather than those at the very top. Any revenue-generating measures must target those on earnings over €100,000 through a real wealth tax and a new higher tax rate”.

“It is important for trade unionists to take to the streets in advance of budget day and send a loud message: austerity has failed and will continue to fail. It has failed both our economy and our society. We need to demonstrate solidarity with those who have been hardest hit by successive austerity budgets, and we need to mobilise support for a new direction.”