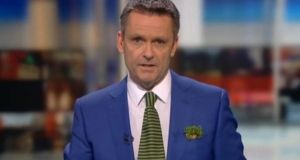 In a tweet Aengus Mac Grianna said he wished to apologise for the sketch. “Truly I am deeply sorry for the offence, distress and hurt caused. It was wrong for me. It was wrong of me.”

The chair of the Oireachtas Committee on Media Niamh Smyth has called on RTÉ to remove a controversial sketch about God from its media player.

Ms Smyth, who is also Fianna Fail’s party’s spokeperson for Arts and Culture, described the sketch which has prompted almost 6,000 complaints to RTÉ as “deeply offensive and blasphemous”.

The Waterford Whisper News skit caused widespread offence when the former newsreader Aengus Mac Grianna read out a mock bulletin stating that God had been arrested on charges of sexual harassment for “forcing himself on a young Middle Eastern migrant and allegedly impregnating her against her will”.

She acknowledged that RTÉ had apologised about the sketch but it remained on the Player.

Ms Smyth said the apology did not far enough. “An apology is meaningless while the clip remains available. I implore the RTÉ Editorial Standards Board who are due to make recommendations this Friday after reviewing the broadcast to remove the offending clip immediately,” she said.

RTÉ’s Editorial Standards Board is currently reviewing the broadcast with regard to compliance with its journalism and content guidelines along with RTÉ’s statutory and regulatory obligations under the Broadcasting Act 2009 and the relevant codes of the Broadcasting Authority of Ireland.

RTÉ said recommendations by the board are expected by this Friday.

In a tweet Mr Mac Grianna said he wished to apologise about the sketch. “Truly I am deeply sorry for the offence, distress and hurt caused. It was wrong for me. It was wrong of me.”

RTÉ has also apologised to “those who were offended by the segment”. It added: “RTÉ recognises that matters which can cause offence naturally differ from person to person, within comedy and satire in particular.

“The formal complaints received by RTÉ are being entered into our complaints system and will be responded to in accordance with the relevant statutory process.”

Some critics have accused RTÉ of having issued a qualified apology while keeping the offending sketch still on the RTÉ Player albeit it with a “viewer discretion” warning.

The Catholic Primate of all-Ireland Archbishop Eamon Martin, described the sketch as “deeply offensive and blasphemous”.

He tweeted on New Year’s Day:” “To broadcast such a deeply offensive and blasphemous clip about God & Our Blessed Mother Mary during the Christmas season on ‘NYE Countdown Show’ on @RTE @RTEOne & on Eve of the Solemn Feast of Mary, Mother of God is insulting to all Catholics and Christians.”

As of Wednesday morning RTÉ had received 5,765 complaints about the sketch consisting of 4,375 emails and 1,390 calls to reception.