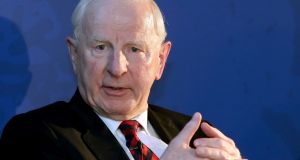 President of the Olympic Council of Ireland Pat Hickey has insisted the organisation does not handle any tickets for Rio 2016. Photograph: INPHO/Dan Sheridan

Olympic Council of Ireland (OCI) president Pat Hickey has insisted the organisation does not handle any tickets for Rio 2016, after tickets earmarked for the body were embroiled in an alleged illegal touting scandal.

An Irish man, Kevin Mallon, and his translator were arrested at a hotel in Rio on Friday with several hundred tickets designated for the OCI in their possession.

The OCI is investigating how Mr Mallon came to have the tickets, which were for high-profile events, including the opening and closing ceremonies, and were allegedly being sold for more than face value.

Mr Hickey has come under increasing pressure to make a public statement on the controversy, with Minister for Transport Shane Ross calling on him to explain the circumstances that led to the arrest of Mr Mallon.

“We immediately assembled a committee to investigate the whole event,” he said.

“We then moved very fast to write to the Brazilian authorities in Rio 2016 to ask them to send us all the necessary documentation and any evidence they have.

“Secondly, we have written to the International Olympic Committee to ask them to do the same thing.

“We have also informed them that if an authorised ticket reseller has transgressed any of the contracts they signed or treated anything in a wrong way, that they should take action.”

Mr Mallon is the Dublin finance director of UK company THG Sports, which was a ticketseller for the OCI during previous Olympic Games, but is not listed as one for Rio 2016.

A company called Pro 10 was appointed to the role for the OCI for the Rio Games.

“We have started to investigate our own ticket agent Pro 10,” Mr Hickey told RTÉ News.

“We have a whole series of questions to be answered there. We are working very diligently to assemble this report.

“We need to be careful until we have all the evidence gathered. There could be legal issues. The person in prison at the moment could be found to be not guilty. We are actively collecting all the information.”

Mr Hickey said that he “wasn’t very happy” that the OCI were embroiled in the scandal.

“This is why we are trying to find out how this happened,” he said. “Did it happen in a legal or illegal way? We don’t handle the tickets whatsoever. The tickets are issued to Pro 10 by Rio 2016.

“I have never met Kevin Mallon and I don’t know anything about him. When I heard the reports, I thought he was based in the UK. To my knowledge, none of the staff of the OCI have met him.

“What I can tell you very clearly is that there has been no impropriety whatsoever from anyone within the OCI or myself in the dealing of tickets.

“The International Olympic Committee will conduct a review and I’m fully expecting the OCI will come out with a clean bill of health.”

Mr Hickey said he was “a very proud Irish man” and was “very sorry” for any embarrassment caused to Ireland in relation to this issue.

“I intend to rectify it as fast as I can,” he said.

The ticketing scandal has not been the only source of controversy during Ireland’s Olympic Games.

Mr Hickey also addressed the expulsion of Irish boxer Michael O’Reilly from the Games after he failed a doping test.

“The athlete is now safely back in Ireland,” he said. “We respected all the relevant procedures and we did everything possible to make sure it was handled in a professional way, which I’m very proud of.”

Mr Hickey also insisted that negative media coverage of the events would not impact other Irish athletes.

“I can tell you categorically that the athletes in the Olympic village are totally isolated from that.”