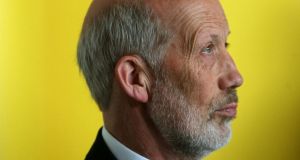 The extradition arrangements between Northern Ireland and the Republic could be undermined in the event of the United Kingdom leaving the European Union, Alliance leader David Ford has said. Photograph: Brian Lawless/PA Wire.

The extradition arrangements between Northern Ireland and the Republic could be undermined in the event of the United Kingdom leaving the European Union, Alliance leader David Ford has said.

Mr Ford, the North’s justice minister, expressed his concern to the House of Commons Northern Ireland Affairs committee which is at Stormont on Monday and Tuesday to hear political, security and business views about June’s in-out EU referendum.

Mr Ford said leaving the EU could result in great difficulties in extraditing suspected criminals between the two jurisdictions North and South.

He said European arrests warrants worked well between Northern Ireland and the Republic but if the UK left the EU a referendum might be required in the Republic to restore the current arrangement.

Mr Ford said those who disputed such arguments “simply don’t get the way politics is currently operating in Leinster House”.

DUP MP for East Belfast Gavin Robinson said Irish concerns about the UK leaving the EU were motivated by fear of losing “their big friend in Europe”.

“Their concern is more to do with losing their big mate in a big pool and that they will become quite isolated should we choose to leave,” he said.

Mr Robinson, a member or the Northern Ireland Affairs committee, rejected arguments that quitting the EU could have implications for the peace process.

“I take it pretty ill for those who suggest that Northern Ireland will descend back into violence should we not benefit from a continued relationship with the European Union. I think that touches to a base level of politics, of concern and fear which really is not suitable,” he said.

Sinn Féin’s Northern chairman Declan Kearney said Brexit “would result in a myriad of serious and far-reaching consequences”. It would lead to the “prospect of reinforced partition and the hardening of the divisions between North and South with the potential knock-on effect for customs including tariffs and adverse knock-on effects for all-island economic activity”.

SDLP leader Colum Eastwood said that for Northern Ireland to leave the single market “would, in one stroke, make a mockery of our years of effort to attract foreign direct investment (FDI)”.

“FDI is vital for Northern Ireland if we want to escape the low value, low wage cycle that has trapped us for generations,” he said.

During his questioning Mr Eastwood made reference to Nobel laureate and former party leader John Hume’s part in the peace process during which Labour MP Kate Hoey made some comment about Mr Hume.

This prompted Mr Eastwood’s predecessor as leader, Dr Alasdair McDonnell to walk out in protest. Ms Hoey subsequently clarified her comments to say she had not been “laughing at” Mr Hume.

Former health Minister Michael McGimpsey, who with party leader Mike Nesbitt delivered the Ulster Unionist Party submission to the committee, warned that quitting Europe could lead to Scotland leaving the United Kingdom. They made their submission after the UUP at the weekend decided “on balance” that it would be better to be part of the European Union.

“This is a game changer as far as Scotland is concerned,” said Mr McGimpsey. If the UK voted to exit the EU and Scotland voted to stay then Scottish National Party leader Nicola Sturgeon would seek a second Scottish independence referendum, he added. “And the likelihood is that she would win it,” said Mr McGimpsey.

Traditional Unionist Voice leader Jim Allister did not accept the argument that Brexit might lead to Scotland leaving the EU. He contended that if that were the case surely groups such as the SNP, the Welsh nationalists, Sinn Féin and the SDLP would be campaigning for exit rather than to remain because it would serve their case for independence.