‘No fry zone’ near schools opposed by council bosses 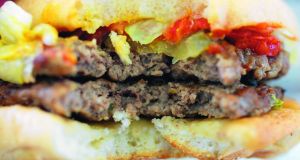 A ban on fast-food outlets setting up within 400m of schools, parks or playgrounds is being opposed by Wicklow County Council management. File photograph: Joe Raedle/Getty Images

A ban on fast-food outlets setting up within 400m of schools, parks or playgrounds is being opposed by Wicklow County Council management.

Wicklow councillors are due to vote on the proposed ban in the coming weeks.

The ban, written into the council’s draft development plan last November, received 206 submissions during a period of public consultation, 202 of them in favour, two calling for more debate and two – including one from Kentucky Fried Chicken – against.

Pressure for the ban came from Greystones-based No Fry Zone 4 Kids, a campaign group formed after the council granted planning permission to McDonald’s for a restaurant, drive-thru and takeaway on a site immediately opposite a three-school campus.

Two submissions calling for greater consideration of the issues were from the Department of the Environment and former TD Billy Timmins.

Two submissions against the ban included one from an individual concerned about jobs, and Kentucky Fried Chicken, which said it offered a wide range of foods to be enjoyed as part of a balanced diet.

Philip Moyles of No Fry Zones 4 Kids said they were hoping they could rely on the councillors to carry the ban as in the original draft.

Mary Robinson says she made her biggest mistake in role over Princess Latifa 00:18
Mandatory hotel quarantine to be managed by ‘one-stop shop’ provider 00:15
Gardaí to examine medical records of suspected Cork killer 00:01
Covid-19: Self-isolation rules to be eased for healthcare workers 00:01
Deaths of three brothers near Mitchelstown investigated by gardaí 22:10