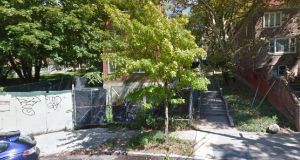 Currently known as “step street”, Easter Rising Way will be a pedestrian staircase that runs along 53rd Avenue, from 65th Place to 64th Street in west Queens.

New York is to name a street to mark the centenary of the Easter Rising.

“Easter Rising Way” in Maspeth, Queens will be named in a formal ceremony on Saturday next week.

New York City Council gave approval for the street naming following a visit by a delegation including the speaker Melissa Mark-Viverito to the State commemorations on Easter Sunday.

Easter Rising Way is a pedestrian staircase that runs along 53rd Avenue, from 65th Place to 64th Street in west Queens. It is currently unnamed. It is known in New York as a “step street”.

It was chosen because it is in a traditional Irish-American part of Queens and because it overlooks the Fenian Monument erected in 1907 by the Irish Revolutionary Brotherhood which was involved in planning the Easter Rising.

The monument was erected to commemorate the 50th anniversary of the Fenian Rising of 1867.

The naming was proposed by Congress member Elizabeth Crowley who represents the district in Queens and has Irish grandparents.

It was brought to her attention by local people who were interested in commemorating the centenary of the Easter Rising.

Ms Crowley said the thoroughfare has been cleaned up and planted in advance of the naming ceremony.

She said the decision by New York City Council to name the street in honour of the Easter Rising was because the Proclamation drew on the US Declaration of Independence.

“The difference is that the Proclamation said ‘Irishmen and Irishwomen’ at a time when women in the United States did not have the right to vote,” she said.

“I see that Proclamation as helping us in our struggles for equality. Our country has been struggling in that direction. I see that as a strong bond between Ireland and America.”

The keynote speaker at the naming ceremony will be Sinn Féin president Gerry Adams who is in the United States for a number of functions. Ms Crowley said he has been asked to speak because of his role in the Northern Ireland peace process.

Some 5,000 people turned out for the official New York commemoration of the Rising on Sunday, April 24th which marked 100 years to the day after it commenced. The event took place at Wagner Park in Battery Park City

The programme included a reading of the Proclamation by Captain Peter Kelleher, 27th Infantry Battalion of the Irish Defence Forces, who also read the Proclamation outside the GPO on Easter Sunday this year.