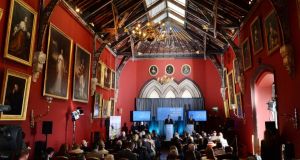 The Irish tourism sector will be refocused to concentrate on attracting high-spending tourists to Ireland over the coming decade, according to a new Government plan.

The tourism policy statement envisages 10 million overseas visits to Ireland by 2025, in comparison with 7.6 million in 2014, an increase of a third, but revenues are projected to increase from €3.5 billion to €5 billion in the same time period, an increase of 42 per cent.

“People, Place and Policy – Growing Tourism to 2025” envisages the creation of 50,000 new jobs in the tourism sector over the next 10 years bringing the total workforce employed in the sector up from 200,000 to 250,000. Tourism revenues will have to grow year-on-year by 5 per cent to achieve the target by 2025.

Marketing strategies will be reorientated towards markets where visitors spend the most money. The largest volume of tourists to Ireland come from Britain, but the biggest spenders are from long-haul markets such as the United States, Canada and the Far East.

“We see long-haul markets gaining a greater percentage over the coming years and tourists from those destinations tend to stay longer and spend more money. The markets of China and India are still in the minority but they are growing in terms of number and volume and spend,” he said.

Gathering-type events will also be organised in the coming years to replicate the event in 2013 and an emphasis will be placed on festivals and events that attract tourists out of season.

He said he received inquiries from many potential visitors in the United States about the commemoration activities next year surrounding the 1916 Rising. He anticipated there would be a Gathering-type element to the Rising commemorations.

The Taoiseach urged the tourism sector to make the best use of quantitative easing, which is making Ireland more competitive for visitors from the UK and the US because of the weakness of the euro.

Minister for Tourism Paschal Donohoe said the retention of the 9 per cent VAT rate for tourism-related products was “absolutely conditional” on the tourism sector continuing to offer value for money to tourists. He maintained that “great harm” had been done to the tourism sector by escalating prices in the past.

Fáilte Ireland chief executive Shaun Quinn said the perception of value for money in Ireland was at its highest level since 2002. Fáilte Ireland is working on new branding for the south and southeast, which will be announced next month. It will offer a single brand under which the history, culture and landscape can be marketed.

“We will use that as a single framework into which we can integrate all of the efforts of counties and communities in the southeast,” the Minister said.