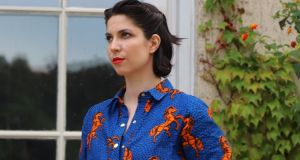 Candice Gordon, first full-time cultural officer for the Irish Department of Foreign Affairs, based in the Irish embassy Berlin: “Cultural diplomacy is about opening dialogue and finding connections between countries, not forcing things down people’s throats.” she says. . Photograph: Tom Taylor

Ireland’s image in Germany is “positive but limited”, with ingrained ideas of hard-drinking wild Celts playing traditional music, says Candice Gordon, as she holds court in a Berlin cafe near a noisy coffee roasting machine

From now on, it is the job of Gordon, the newly-appointed and first full-time cultural officer in the Department of Foreign Affairs (DFA), based in the Irish embassy in Berlin, to bring that image into a new era.

“It’s important to honour that heritage but I’m keen to bring our image forward in a more adventurous, progressive direction,” she tells The Irish Times.

Gordon is the first in a series of cultural officer appointments being made in seven locations around the world. New York and London will follow shortly, followed later by Beijing, Tokyo, Paris and Los Angeles.

Cultural diplomacy is an intriguing change of pace for the northside Dubliner who, aged 12, discovered her love of performing with busking. She then ran away with a circus to France before returning to song-writing and composing, with a sideline in political salons.

Nearly a decade after she moved to Berlin, she is anxious to help other Irish artists discover the opportunities and potential she has found in Germany. Collectively, she hopes to refashion how Ireland is viewed in Germany – and vice versa.

The idea of a full-time cultural officer was first mentioned in a 2018 report about how Ireland could develop a “wider, deeper” footprint with its largest EU partner.

Much on the to-do list has been achieved, from a new consulate in Frankfurt to regular high-level Irish-German ministerial meetings. Another key recommendation was that serious cultural spending is not an optional extra but a prerequisite for a more enriching, sustainable relationship with Germany.

While Ireland sells itself as the island of saints and scholars, Germany pitches itself as a nation of thinkers and poets. So Gordon’s new job, likely to require the patience of a saint, will be to match Irish and German scholars, thinkers, poets, singers, painters, dancers – and more.

“Cultural diplomacy is about opening dialogue and finding connections between countries, not forcing things down people’s throats,” she says.

Her three-year role, she says, will make a contribution to shifting the relationship from fuzzy mutual regard to deeper mutual understanding.

Whether Kerrygold or the Kelly Family, many Irish-themed successes in Germany have their roots in the Irish Journal by Nobel laureate Heinrich Böll in 1957.

Nearly seven decades on, Gordon sees ample room to expand that romantic-nostalgia view of Ireland, fixed in many German minds, by highlighting the island’s technological prowess, film and animation capabilities – as well as considerable talent pools in opera, dance and the visual arts.

The country’s vast, decentralised structure of 16 federal states means even regional cities have full orchestras, opera houses and arts schools. In a country of 83 million, says Gordon, even fringe interests have festivals and loyal followers.

The new cultural diplomacy strategy, part of the Global Ireland plan running to 2025, is co-ordinated from Dublin by Eugene Downes, cultural director of the DFA, in close partnership with Culture Ireland.

The DFA’s new cultural unit was established a year ago amid the realisation that, despite punching above its weight internationally on culture, Ireland’s cultural diplomacy is underdeveloped in many key countries, particularly Germany.

No figures are available on how much money will be earmarked for the new cultural push in Germany, though a key priority is a large-scale cultural year similar to the 2011 Imagine Ireland year in the US that cost €5 million.

As Brexit reshapes Ireland’s relationship with its closest neighbour, leading figures in the arts and German-Irish community have welcomed the chance to build new cultural bridges.

“There has never been more interest in this than now, from both Germany and Ireland,” said Dr Gisela Holfter, director of the University of Limerick’s Centre for Irish-German Studies. “But this opportunity needs to be seized and followed up at all levels and special attention needs to be paid to language learning and research into bilateral relations.”

With performance, partnerships and salon-style events, Gordon hopes to give all voices a platform in the coming years.

“It’s important there is freedom to do events with a critical view of Ireland,” she said. “And it’s appealing to do that here in Germany, where it is almost part of their cultural identity to look at the shadows. I think they would really appreciate it if we do the same thing.”