Card to be available from July at €35, and acceptable on all airlines within EU and EEA 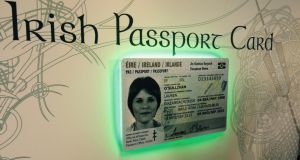 Minister for Foreign Affairs Charlie Flanagan said the card would be useful for young people who currently use their passports as a form of identification. Photograph: Cyril Byrne/The Irish Times.

A new credit-card sized passport card, valid for travel within the EU and the European Economic Area, has been launched and will be available from July.

The card will be valid for a maximum of five years and costs € 35.

It will not, at least initially, be valid for use beyond EU and European Economic Area borders.

Switzerland has signed the agreement but has not yet ratified its membership.

The Department of Foreign Affairs has said the new card will be useful for those who don’t want to carry the older style passport booklet.

Minister for Foreign Affairs Charlie Flanagan said it could also be used by young people as a form of identification, instead of their full passports.

Speaking at the launch of the design for the new card Mr Flanagan said a similar passport card was available for US citizens travelling over land between the US, Mexico and Canada.

He said the passport card would be something of “a world first for Ireland” in that it would be available for international air travel.

Mr Flanagan acknowledged some European airlines accepted national identity cards for travel within some parts the EU but he said the passport card would be the first to be “universally acceptable” for air travel within the EU and EEA. Applications for the new card will be accepted online or through a new smartphone app, which allows applicants to use photographs of themselves which they have taken on their own phones.

The security features on the passport card include the holders signature, a kinegaram overlay featuring a 12 string harp, a machine readable zone and faded printing around the edge of the photograph.