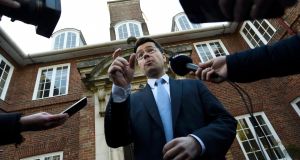 Northern Secretary James Brokenshire said he was trying to determine if there was a way to avoid elections. Photograph: Clodagh Kilcoyne/Reuters

A new plan to reduce the cost of the “cash for ash” heat scheme in the North will be fairly assessed, the Sinn Féin Minister for Finance Máirtín Ó Muilleoir has pledged.

He was speaking as Northern Secretary James Brokenshire met political parties to assess if Assembly elections can be avoided following this week’s resignation of Martin McGuinness as deputy first minister. He resigned in protest at the refusal of First Minister Arlene Foster to step aside temporarily while an inquiry took place into the heating scheme.

Mr O Muilleoir’s department has been presented with new proposals that, if accepted, could significantly reduce the projected overspend of up to £490 million (€566 million) on the renewable heat incentive (RHI) scheme.

The “business plan” to limit the cost of the scheme came from the DUP Minister for the Economy Simon Hamilton, who last week proposed to introduce emergency legislation that he claimed would reduce the overspend to “effectively zero”.

Mr Ó Muilleoir dismissed the previous proposals as a “sticking plaster” solution, but said this latest plan would be fairly assessed.

Mr Ó Muilleoir said he would assess the plan “in a politics-free manner”. He told the BBC on Wednesday evening: “I am stepping back. I have tasked the most senior people within the Department of Finance, the best legal minds we have, the best economists, the best accountants, to assess this plan to check does it stand up legally [and] financially.”

On Tuesday the DUP leader Arlene Foster also said her party had plans to carry out a public inquiry into the RHI scheme.

Sinn Féin has until next Monday to decide whether to nominate a replacement for Mr McGuinness as deputy first minister, a move that would prevent elections. While the Sinn Féin Minister for Health Michelle O’Neill said her party was “not interested” in crisis talks to avert an election, some senior DUP sources said efforts would continue to see if a compromise could be struck with Sinn Féin.

Mr Brokenshire appeared reconciled to the inevitability of elections. He said he was trying to determine with the parties if there could be a way forward that would avoid the necessity of elections.

He was told firmly by a Sinn Féin delegation, however, that he should call elections as soon as possible and that the party would not be nominating an Assembly member to replace Mr McGuinness as deputy first minister.

Meanwhile, a lawyer for human rights activist Raymond McCord said the collapse of Stormont could delay British government plans to begin exiting from the European Union in March. Mr McCord is taking a case to the UK supreme court claiming that the British government cannot leave the EU without the consent of the people of Northern Ireland, of whom 56 per cent voted in favour of remaining in Europe.

Solicitor Paul Farrell said that elections, followed by potentially lengthy political negotiations, would delay the return of devolution to Northern Ireland. “In the current circumstances, where there is a potential suspension of the institutions, the approval of the devolved institutions would not be possible,” he told Reuters.

“Devolution has obviously added a layer of complexity to the constitutional arrangements within the United Kingdom and this case is addressing those complex relationships now,” Mr Farrell added.

1 California shuts down again as US coronavirus cases surge
2 US passengers fly into Dublin: ‘I’m here for six days. I guess I’ll have to stay inside’
3 Travel rules unlikely to include mandatory quarantine or cancelled flights
4 Covid-19: 200 to 250 people arriving in Ireland from US daily - Coveney
5 Maureen Dowd: Biden has his limitations but he’s no Trump
Real news has value SUBSCRIBE