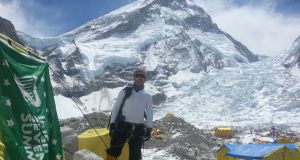 Paul Devaney at Everest base camp in Nepal, two hours before the earthquake and subsequent avalanche. Photograph: Paul Devaney

The Department of Foreign Affairs has made contact with six of the 10 Irish citizens that had remained unaccounted for following the earthquake in Nepal.

The latest statement from the Department of Foreign Affairs said: “As of this morning, there are now four citizens on the department’s list with whom contact has yet to be made.

“Some of these people may be in remote areas where communications would be sporadic at the best of times, or may not in fact have been in the area at the time, which means it is taking time to formally account for all Irish citizens.”

The department said that there are still no suggestions that there have been any Irish fatalities in the disaster, and that the consular response team was continuing its work in the region in conjunction with the Irish embassy in New Delhi, India.

One injured citizen was reportedly evacuated from the region on a Norwegian flight this morning, following cooperation between Irish and Norwegian officials.

The last Irish person on a separate Red Cross list of those missing following the earthquake, Thomas Drumm (55), made contact with his family yesterday and told them that he is safe and well in Nepal.

Minister for Foreign Affairs Charlie Flanagan has approved “up to €1 million” for the humanitarian response to the earthquake.

The avalanches claimed at least 18 lives on the mountain, including that of his teammate, Google senior executive Dan Fredinburg.

Mr Greenan’s brother Alan, managing director of Hire Here Ltd, said his brother was “in good spirits, but probably sedated as he would be in quite a lot of pain”.

The hospital in Kathmandu was running short of supplies and food, he said, as are a number of hospitals trying to treat thousands of people injured in the massive earthquake.

Co Longford climber Paul Devaney, who had postponed his last of seven summit climbs on Everest last year after an avalanche claimed the lives of 16 Sherpas, has described his narrow escape on Saturday.

In an email to The Irish Times from Pheriche, he said his group of eight climbers led by Mingma Tsiri Sherpa, 19-times Everest summiter, were “lucky”.

“We had placed our camp in the right place, by chance and not design,” Mr Devaney said.

He described how he was in the food tent at base camp on the morning of the earthquake, when he noticed the table starting to shake, followed by a “violent movement”.

“I ran outside and the entire Khumbu glacier was moving under my feet,” he said.

“Our camp was directly under the icefall ... the movement was extraordinary, and exaggerated by the fact that we stood on an active glacier.

“My climbing buddy, Teo from Norway, screamed at me to turn around, and I then saw a wall of snow as high as I could see coming towards our camp at frightening speed,” he said.

His said that his first concern was for some of his group’s Sherpa team higher up on the mountain, and he “never thought for a moment” that the “the tragedy would be less than 50 metres away, and in base camp”.

“Within minutes a guide was in our camp, shouting for people to help carry the injured,” Mr Devaney wrote.

Base camp had been transformed into a “tornado zone”, he said,while the medical camp “somehow survived”.

Mr Devaney said he “wanted to scream with relief” when it was confirmed that Sherpas and colleagues further up had survived.

“I wanted to sit and cry, but the danger of the quake was not passed and so we were instructed to put on our helmets, and not to sleep so that we could react immediately.

“What followed was the longest night of my life. Every sound caused us to jump,” he said.

“The climbing season is most certainly over now. Our next decisions are about how to get home. This country has been shaken to its core.”