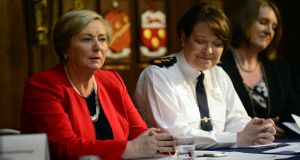 Minister for Justice Frances Fitzgerald has said it is important confidence is maintained in the National Car Test (NCT) after gardaí announced a review of incorrect prosecutions linked to the system is underway.

Ms Fitzgerald was speaking after gardaí said an urgent review of prosecutions taken against motorists who had already paid a fine for not having an up-to-date NCT certificate had begun.

A Garda spokesman would not confirm how many years of prosecutions were being reviewed or how many wrongful offences were involved.

The Tánaiste said it was very unfortunate that this “procedural, administrative error” had occurrred but it had been discovered and would be rectified as quickly as possible.

Ms Fitzgerald said the review would examine “the scale and scope” of the prosecutions taken.

Garda superintendents have been written to and will withdraw NCT-related prosecutions where it has been shown that fines have already been paid.

An Garda Síochána issued a statement on Friday saying that a review of such prosecutions was underway.

Ms Fitzgerald said there were a lot of road traffic cases prosecuted but the review would establish the facts of how many should not have been.

She said it was “important to remember that people broke the law in the first place” but that the review would correct the procedural, administrative error.

Earlier, Sinn Féin called on Garda Commissioner Nóirín O’Sullivan to clarify the scope of the review. The party’s justice spokesman Jonathan O’Brien made the call following the garda statement.

Mr O’Brien claimed the statement was issued on Friday night “in order to attempt to bury the story and this is the latest in a series of disasters for the gardaí”.

He said “an enormous amount of public money must have been wasted in pursuing these unnecessary prosecutions and even more will be spent on rectifying this”.

He also said there was an onus on the Minister for Justice “ to ensure that the Garda Commissioner is accountable for this”.

In its statement, An Garda Síochána said the review aimed to establish “the full extent of the issue and to ensure that action is taken to prevent re-occurrence and address the consequences of any prosecutions which were incorrectly taken”.