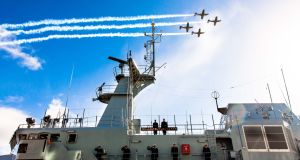 A flyover by the Air Corps at the docks in Galway during the naming and commissioning of the Naval Services newest vessel the ‘LÉ William Butler Yeats’. Photograph: Andy Newman

Plans for a new Naval Service ship which is equipped to provide full medical facilities at sea have been endorsed by Taoiseach Enda Kenny.

The White Paper on Defence promises a multi-purpose vessel equipped with a fully functioning hospital, Mr Kenny said in Galway docks on Monday.

This would allow medical personnel to serve in “war and conflict situations”, Mr Kenny said. He was speaking at the commissioning of the Naval Service’s latest new patrol ship, LÉ William Butler Yeats.

Mr Kenny said it was “his wish” that such a multi-purpose ship – still at pre-design stage – would be built to serve in humanitarian crises. It was in “keeping with our rich tradition of charity and volunteering”, he said.

Paying tribute to the role of the Naval Service in search and rescue in the Mediterranean, Mr Kenny said the crews were bringing “not just hope and comfort, but life itself to the migrant men, women and children pulled from the sea”.

Ireland was “committed to playing its part in the migrant crisis, particularly in terms of the Middle East”, he said.

“Equally, as a people with a long history of emigration, we must remember that as humans we don’t give birth to ‘migrants’. We give birth to children, who, if they are lucky, grow to adulthood,”he said.

Mr Kenny joined Caitriona Yeats, granddaughter of Nobel laureate WB Yeats, in one swing of a champagne bottle to name the ship.

Mr Kenny noted the resonance of the occasion, 68 years after the LÉ Macha repatriated the poet’s coffin from France to Galway, for burial in Drumcliffe, Co Sligo.

The new vessel, which was commissioned by Minister of State for Defence Paul Kehoe, is the third in a series built in Appledore shipyard, Devon, along with LÉ Samuel Beckett and LÉ James Joyce. A fourth ship in this class is due for delivery in 2018.

The ceremony, which was closed with an Air Corps fly past, was attended by Galway mayor Noel Larkin, Defence Forces chief of staff Vice-Admiral Mark Mellett, Naval Service flag officer Commodore Hugh Tully and a number of Defence Forces personnel.The 90m ship set sail on Monday evening from Galway under the command of Lieut Cdr Eric Timon and an all-male crew.

The Defence Forces said that it was a coincidence that there were no women assigned, and this was due to the current sea/shore rotation.