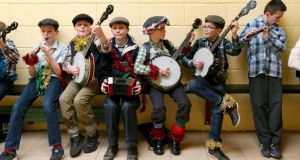 “So no more angle grinders, no black puddings, no more pots of German jam,

No lumps of hairy bacon and no more wetsuits from Japan,

No packs of streaky rashers, and I’ll have to do without,

The portable generator just in case the lights go out...”

When songwriter Mickey MacConnell sang these lines as part of his infamous Ballad of Lidl and Aldi in Co Kerry over a year ago, little did he know that his music would become a mummers’ festival sensation.

Under a full moon and frost-lit night in an east Galway community hall, there were howls of delight as performers from Rahan, Co Offaly, gave their interpretation of MacConnell’s YouTube hit.

The joys of German supermarkets, family tensions and water charges were among the themes explored by the participants in the annual Galway Mummers’ Festival which took place in the village of New Inn over the weekend.

Unlike Strawboys at weddings, and Wrenboys on St Stephen’s night, mummers are contemporary versions of medieval mimers who marked the year’s passing with a reflection on death and resuscitation.

The nine groups participating in the 37th annual festival in New Inn were bound by few such strictures, but with no heroes dying or otherwise and no complex battles between darkness and light.

“We have some rules, in that there can be no more than 25 performers on stage, and we have to include two songs at least and one story,” explained New Inn native Claire Smith, who co-ordinated the winning Rambling Mummers group.

Cloth caps, berets, wigs and trilbys were ribboned with tinsel as the competitors took to the stage, with jigs, reels, hornpipes, storytelling and dance – interspersed with the antics of the various mummer “kings”.

While three groups from Galway and Offaly fought for the senior title on Saturday night, the north Galway community of Lackagh dominated the juvenile and junior sections on Sunday, fielding several groups of wrenboys, strawboys and “muiméirí”.

“Mumming was long associated with farms around east Galway and the midlands, and so we thought we would revive it as a fundraiser for our hall in 1986 – and it has been running ever since,” said Mr Mullins said.

Among its loyal supporters are emigrants, including US-based businessman Sean O’Rourke who lives in Long Island but returns home for his small village’s big festival every new year.