A 68-year-old man has been arrested after he drove into Trinity College and badly damaged the historic gates at College Green and hit a number of cars on campus. 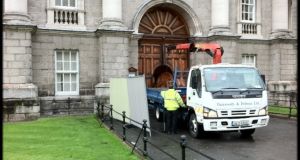 The damaged front gates at Trinity Collge Dublin. A man drove through the gates this morning. Photograph: Aoife Carr 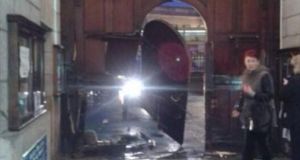 A view of the damaged gates at TCD this morning. Photograph: Raeghnya Zutshi via Twitter 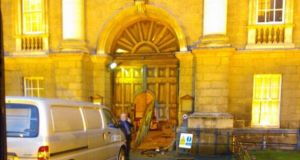 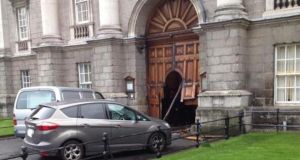 A motorist who damaged the iconic wooden gates that have hung in the College Green entrance of Trinity College, Dublin, rammed them four times in his car after security staff tried to prevent his escape.

The 68-year-old Dubliner also rammed or crashed into four cars on the road at College Green as he tried to drive off and collided with another vehicle moments later when travelling against the one-way flow of traffic on nearby Dawson St.

The large wood gate at the college, which dates back to the 1800s and is made of oak, was extensively damaged in the early morning incident yesterday, but the broken pieces have been gathered up in the hope it can be restored.

A smaller pedestrian door set into the entrance was also left hanging from the rest of the structure.

Garda sources said the suspect, who was still being questioned last night, appeared to have no connection to the college and no motive for causing the criminal damage he is now accused of.

The man is originally from Cabra, north Dublin, but has been living in the north inner city in recent years. He has worked as a taxi driver at different periods in recent years and was driving his own car during the incident in the south inner city.

Trinity are taking this rebrand seriously. They're destroying all history, including the front door. Yikes. #TCD pic.twitter.com/iOjUb0oKg6

Gardaí are working on the theory that he has mental health issues which led him to act in the way he did. They are trying to establish if he had stopped taking medication.

At around 6.30am yesterday, cleaning staff working for a contractor were driving through the College Green gates when the suspect followed close behind and drove into the cobbled courtyard of the Trinity campus.

Garda sources said he was seen driving erratically and that security staff closed the gates in a bid to detain the man in his vehicle until gardaí arrived.

However, he drove his car at speed at the gates and then reversed at speed and repeatedly rammed the wooden doors until he succeed in escaping, with loud music coming from his car during the incident.

As he drove back out on to college green and joined traffic there, gardaí believed he rammed or collided with three of four vehicles before travelling down Nassau St and turning right up Dawson Street, driving against the traffic with a Garda car following.

As a van drove down the street towards him, the man’s car was involved in another collision and was then taken from his car and arrested.

He was detained initially on suspicion of drunk driving, though his questioning by gardaí was suspended until late afternoon as he was seen by a doctor.

He was then released from custody and immediately rearrested for questioning on suspicion of criminal damage and was still being held last night.

Gardaí said a number of people were trying to gain access to the college on foot via the main gates when the man began ramming his way out. “We’re very lucky that nobody, including the guy himself, was injured,” said one source.

Marquees in place on campus for the Trinity Ball, which is being held this Friday, were not damaged in the incident, though a steel gate and a vehicle on campus were damaged.