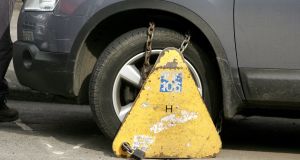 Asked whether there were Dublin City Council plans to introduce a new form of clamp to tackle the ongoing illegal removal of devices from vehicles, a spokeswoman said the current device met “the highest industry standards”. File photograph: David Sleator/The Irish Times

A total of 500 clamps were illegally removed by motorists from vehicles across Dublin last year, costing the Dublin Street Parking Services (DSPS) €40,000.

In a report released this week, the DSPS said it was taking a “robust approach” to dealing with the high number of illegal removal of clamps in the capital.

The report revealed 77 vehicles were impounded in 2015 due to the illegal removal of clamps. Vehicles are impounded if someone removes a clamp themselves and then is caught parking illegally.

A Dublin City Council spokeswoman said the council could only legally impound a vehicle when it is illegally parked.

Asked whether there were plans to introduce a new form of clamp to tackle the illegal removal of devices from vehicles, the spokeswoman said the current device met “the highest industry standards with hardened steel and a high security lock”, and when properly secured could only be illegally removed with “the aid of heavy duty industrial cutting equipment”.

“All enforcement practices are regularly reviewed and there are no plans to replace the current device”, she said.

It costs €80 to remove a clamp from the wheel of vehicle and is a criminal offence to remove or tamper with a clamp.

A number of successful prosecutions have been carried out by An Garda Síochána in dealing with motorists caught tampering with clamps on their cars, said the report, adding that one such fine resulted in a payment of €1,250.

It added that a number of prosecutions for criminal damage were ongoing and that all incidences of “unauthorised removal of a clamp” would be vigorously pursued by the council.