Monk and footballer to be given Freedom of Dublin City 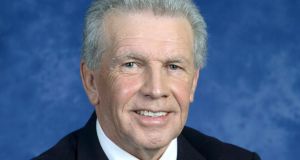 John Giles who won 59 caps for Ireland was awarded UEFA’s Jubilee Award in 2003 which named him best Irish player in fifty years.

Capuchin Brother Kevin Crowley who has been providing food for Dublin’s poor for half a century, and footballer John Giles are to be given the Honorary Freedom of the City of Dublin, on Saturday evening.

Lord mayor Christy Burke will confer the honours in the Mansion House’s Round Room, in recognition of Brother Kevin’s work in the field of social justice, and Mr Giles’ achievements in sport.

The citation notes Brother Kevin has been providing people who are most in need with food and shelter for almost fifty years through his work at the Capuchin Centre in the heart of Dublin.

John Giles’s citation notes his distinguished career in football included 59 caps for Ireland. In 2003, he was winner of a UEFA’s Jubilee Award which named him best Irish player of the past fifty years.

The lord mayor said the freedom of the city was the highest civic honour Dublin could bestow. “It is a privilege for me to confer the freedom on these two most deserving recipients, Brother Kevin Crowley and John Giles.

“I have known Brother Kevin for many years and have always been inspired by the invaluable work that he carries out each and every day at the Capuchin Centre in the city. John has been a true leader in his sporting life and has achieved greatness through his skill both as a player and as a manager. By giving this award the city is acknowledging their unique contribution” the lord mayor said.

Brother Kevin said he loved the love the work. “My real goal in life is to help those that are in need and I would hope to keep going at that for as long as I can. I feel very honoured and proud to accept the Freedom of the City and it’s a privilege to accept it on behalf of homeless people and people in need.”

Mr Giles also said he played football “because I loved it and enjoyed it”.

“I didn’t set out to get awards like the Freedom of the City. Anything like this comes as a surprise. As far as I am concerned I was doing my job and I enjoyed it. It is an extra bonus and a great honour. It’s great for my family and friends and it’s great for the football community,” he said.

The Freedom has previously been conferred on 78 people ranging from presidents to prisoners of conscience to people in sports and entertainment. The first recipient of the Freedom of the City was Isaac Butt in 1876. The most recent recipients were Brian O’ Driscoll and Fr. Peter McVerry in 2014.

Brother Kevin Crowley and John Giles will be presented with a gift from the city specially commissioned for the occasion called “Castles”. The pieces, by artist Michele Hannan, are made of ceramic and glass on a stone base. They will both also receive an inscribed scroll.