Molly Sterling performs in Vienna ahead of Eurovision 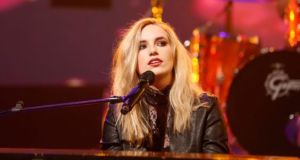 Molly Sterling was one of only four of this year’s Eurovision acts to perform in ‘Pop Meets Opera’, a lunchtime concert headlined by star Peruvian tenor Juan Diego Flórez and last year’s winner Conchita Wurst 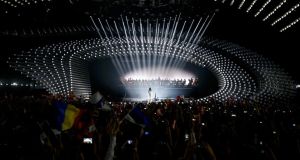 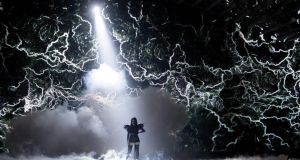 Nina Sublatti of Georgia in rehearsal for the first semi-final. Photograph: Georg Hochmuth/EPA

Singing on the stage of the Wiener Staatsoper, one of the world’s great opera houses, is an honour that could crown a career.

On Saturday, for 17-year-old Molly Sterling, it became an unexpected benefit of representing Ireland at this year’s Eurovision Song Contest.

Sterling was one of only four of this year’s Eurovision acts to perform in Pop Meets Opera, a lunchtime concert headlined by star Peruvian tenor Juan Diego Flórez and last year’s winner Conchita Wurst.

“It was mental,” said 17-year-old Sterling after the concert. “I get nervous when I can’t accept what’s happening to me - like, I don’t deserve to be playing here!”

Sterling said she overcame nerves by “going into my own little world onstage” and “vibing with” the two other Irish artists performing with her - co-songwriter Greg French and percussionist Jimmy Rainsford.

While the artists from Norway, Cyprus, and Hungary performed their competition songs, Sterling chose to sing a new number, Build Fireworks Again, also co-written by French.

While this was doubtless a missed opportunity to promote Ireland’s Eurovision song Playing with Numbers, French explained that choosing a different song allows Sterling to keep their contest song fresh: “If she keeps on singing Playing with Numbers I worry that on the night when the lights are on, the raw emotion will be drained out of that.”

The selection of performers was made, a representative of the Austrian state broadcaster ORF explained, by a combination of the suitability of their music for the venue - all songs performed were ballads - and artists’ availability and interest level.

The concert is part of ORF’s efforts to exploit Vienna’s reputation as a high-art haven while honouring its current role as host of the world’s biggest pop song contest.

Wurst, sporting a new shoulder-length hairstyle and a sky-blue strapless frock, performed what she referred to as her “first chamber version” of last year’s winning song, Rise Like a Phoenix, accompanied by the seven-piece classical ensemble The Philharmonics.

Other artists sang opera and operetta standards by Puccini, Rossini, and Victor Herbert; all participating artists, pop and opera alike, united in an encore of Libiamo ne’ lieti calici from Verdi’s La Traviata.

Sterling performs in the second Eurovision semi-final on Thursday night.