Marriage used as excuse for ‘great party’ by many, bishop claims 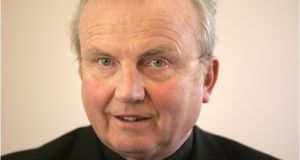 The Bishop of Derry Dr Donal McKeown said marriage used to make a ‘hugely significant’ transition from the single to married life, but that transition had been devalued. Photograph: Dara Mac Donaill/ The Irish Times.

Marriage for many co-habitating couples has just become an excuse for a “great party”, a Catholic bishop has claimed.

The Bishop of Derry Dr Donal McKeown said marriage used to make a “hugely significant” transition from the single to married life, but that transition had been devalued.

Speaking at a Mass to mark the Derry Diocesan pilgrimage to Knock, Bishop McKeown quoted Pope Francis who wrote that marriage “now tends to be viewed as a form of mere emotional satisfaction that can be constructed in any way or modified at will.”

Bishop McKeown said there had been much discussion in recent times around the marriage equality referendum. He asked why the State was involving itself in marriage at all.

It was, he suggested, because, of the “enormously important role it plays in both social stability and the formation of children”.

“Marriage has been legally recognised because it is a crucial private and public arrangement,” he said “When the vital role of marriage is downplayed society and especially children lose.”

He continued: “By comparison modern culture tends to suggest that “promiscuity is just part of growing up and that the use of pornography is fine”, the Bishop told the congregation.

“In that situation, for many the marriage ceremony marks not a key transition point in people’s lives but rather the time when they have been living together and gathered enough money for a great party.”

Bishop McKeown predicted next year’s World Meeting of Families will be a opportunity for Irish society to celebrate “relationships, faithfulness and heroism”.