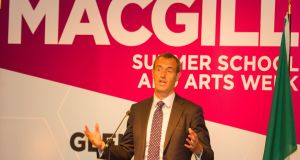 Lone wolf extremist killers such as the man involved in last week’s mass murder in Nice, often have a tendency to tell others of their plans before mounting attacks, an Irish expert on international terrorism has said.

Dr Paul Gill, speaking in the wake of the attack in the French city in which Mohamed Laouaiej-Bouhlel killed 84 people, said this tendency could be a significant factor in counteracting the actions of such killers.

He told the MacGill Summer School in Glenties during a debate on how to confront the challenge of international terrorism that more than half of the “lone actors”, a topic he studied for five years, made verbal statements to others about “specific parts of their attack plan”.

“This finding highlights a major contradiction between the empirical reality and those assertions that nothing can be done to counter the threat,” he said.

Dr Gill said his research has shown that “lone-actor terrorists” were significantly more likely to have a history of mental illness than terrorists who operated in groups.

“This illustrates different vulnerability structures and also potentially different avenues for intervention,” he said, noting that the recipient would have to pass the information on to the authorities.

Dr Gill explained that as part of the research he and his academic colleagues compared a sample of lone-actor terrorists to over 100 non-ideological mass murderers. “Their backgrounds and behaviours were strikingly similar. There was little to differentiate them,” he said.

Rob Wainwright, the director general of Europol said it was “highly challenging” for the security services and law enforcement authorities to prevent every planned terrorist attack.

But he believed that notwithstanding the great threat from Islamic State it was in “decline” and was becoming “more and more squeezed”.

Asst Garda Commissioner John O’Mahoney said the threat in Ireland from Islamic State is assessed as “moderate” on a range which goes from low to moderate to substantial to severe to critical.

“In other words Ireland enjoys a relatively benign security environment, with no specific intelligence of a particular threat but a potential threat may exist,” said Mr O’Mahoney.

Mr Wainwright agreed with that assessment, adding that unlike some continental countries Ireland was not in the “firing line” from Islamic State.