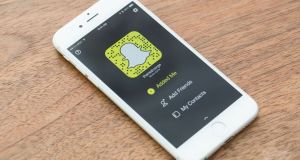 A man who took a Snapchat video of himself snorting cocaine, while wearing a T-shirt from the Dublin restaurant in which he worked, has lost his unfair dismissal case at the Employment Appeals Tribunal.

Last week the tribunal found against James Boyle, Knocklyon Avenue, Dublin, who lost his job at Wagamama’s restaurant in Dublin city centre in 2014.

Mr Boyle had been working as a waiter and was a good and popular employee, the tribunal determined. There seemed to have been “a culture of going out and socialising among the workforce” and his employer described the team as “close”.

In August 2014, Mr Boyle sent a Snapchat, a 25-second video made using a mobile phone which disappears once played, to friends and work colleagues.

His employer believed it was taken in the restaurant during his shift. Mr Boyle was called to a meeting and told he could resign, with “some dignity and some privacy and a reference”, or go through a disciplinary process.

The tribunal said it accepted that Mr Boyle’s employer was concerned that he was taking drugs at all, never mind at work. It said the meeting was not conducted in a proper manner with regard to normal practices.

While it may not approve of the choice of action, between resignation and disciplinary procedure, being put to Mr Boyle, it accepted the employer’s motivation was to protect the claimant.