Looking at the secrets of Ireland’s centenarians

All Ireland's “super-centenarians", people who have lived past 110, were women 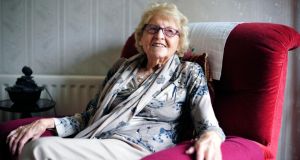 One of Máire Godfrey’s earliest memories is of the soldiers who lived in her home in Co Kerry during the Civil War in 1922.

About 15 Free State soldiers occupied her home for nine months until the war was over, but they were “awfully good”, she says.

“They used to mind us for mammy and play with us, sing songs for us and tell stories,” she says.

Godfrey was six-years-old at the time, and her Catholic family had just been forced to move from their home in Belfast due to sectarianism.

The centenarian, who turned 100 on May 30th of this year, says she believes “life is very different now, much faster”.

She says her longevity is down to good genes - her mother and grandfather both lived to the age of 95 - but she says she also “stays active” and has been a keen golfer all her life.

The retired businesswoman lived through two World Wars, the Great Depression and 18 American presidents. She also outlived her two husbands.

Documentary film-maker Alex Fegan interviewed Snavely and almost 30 other centenarians about their lives for Older Than Ireland, due to be released on September 25th.

Snavely was tired of being asked the secret to her long life, Fegan says, and she used to joke and “wind people up” when they asked.

“She believed that it’s just genetic,” he says, adding that many of the centenarians the team interviewed didn’t fit the stereotype of healthy living.

“That’s what we discovered about the ‘secret’ - there is none.”

Snavely’s longevity ensured her a place among an exclusive group of Irish “super-centenarians”, individuals (all of them women) who have lived past the age of 110.

The Gerontology Research Group lists nine such individuals from Ireland, two of whom remain unverified, although “almost certainly true”, centenarians.

According to Prof Tom Scharf, director of the Irish Centre for Social Gerontology at NUI Galway, the number of people exceeding the age of 110 is set to grow.

He describes the longevity of individuals like Katherine Plunket, the second- longest-living Irish woman, who was born in 1820 and was aged 111 years and 327 days when she died, as “an amazing quirk of history”, but says that in future living to be 110 or more may not be as rare an occurrence.

“There seems to be no tailing off in the increase in life expectancy so we haven’t yet hit the plateau. We know with great certainty that the numbers of centenarians are going to grow in the years ahead in Ireland as in other countries.”

“In future we may be talking about people who have passed away at 115 and further down the line . . . as super-centenarians . . . there is no reason to think that that will not happen,” he says.

Figures provided by Áras an Uachtaráin show a general upward trend in the numbers, with 407 Irish people worldwide who turned 100 last year receiving the centenarian bounty.

The Áras also issued commemorative coins to 626 people aged 101 and older, 355 of whom were Irish residents.

The growing number of people in this age category means that researcher Finbarr Connolly, who has verified a number of super-centenarians for the Gerontology Research Group, now only checks for people aged 106 or older to verify their lives and deaths.

He does so using online death notices, the Irish Genealogy website and the General Records Office, among others.

What motivates him is not health or medical science but “the connections these people have with local history and folklore, the link they provide with a bygone age and culture and, more prosaically, the fact they are the last eye-witnesses of particular events”, he explains.

Looking at the changes in society over her 100 years, Máire Godfrey, who lives in Donnybrook, Dublin, thinks there is more pressure on this generation of women to balance work and family, and that “women of today have a harder time than we had”.

She was married for 69 years to her husband Jim, who passed away last year.

“You have to work at your marriage all your life, I think people forget that.”

Women today have modern technology to help them balance life, she says, and “they make a very good job of it, but I think our lives were more easygoing”.

She too has embraced technology and has a laptop and a Facebook page, called “Mamó’s hundredth year”, which was set up by her granddaughter to document her bucket list in the run up to her 100th birthday.

She uses Google to help her with her daily crossword puzzle - “that computer is a fantastic thing”.

Fegan says he found that all the centenarians he interviewed had a very strong sense of self, including a sense of humour and mischief.

“The sense of experience and wisdom that they have is quite remarkable.”

Godfrey’s mischievous bucket list saw her take her first trip on the Luas (“fantastic”), trips to Dáil Éireann, the Four Courts (“brilliant”) and McDonalds (“I thought it was lovely”), eating a 99 ice-cream, meeting her idol, golfer Pádraig Harrington, and going to a 3D film (“terrific”) and the zoo.

Since 2013, she has been writing a book called A Century of Life, which is due to be released next month.

Getting older never bothered her, but looking well is still important to her. She says she is “very particular” about her appearance, gets her hair done once a week and keeps her nails painted.

“I always kept myself very well and why should I stop now?” she asks, with gold-painted nails to match her rings.

She says she has met nothing but kindness and even “embarrassing goodness” since she became an elderly lady.

“It’s great to become an old woman,” she says. “I suppose when you get old, nothing affects you - you can take life as it comes.”

Scharf believes science has the answer to reaching such an age. “There is something about these individuals who have survived childhood and adulthood, that they must have some unique biological characteristics,” he says.

“At the moment these are highly unusual individuals who have been very robust over their lives. But we have to get used to this because in the future there will be many more people who reach these ages and many older ages still.”