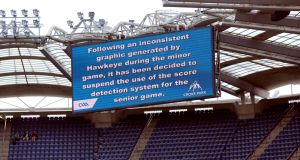 The decision is taken not to use the Hawk-Eye technology for the game. Photograph: Donall Farmer/Inpho

Much like the bird that never flew on one wing, it’s hard to find use for a hawk that isn’t clear on what its eye has seen.

And so it was that the GAA had to stand down their Hawk-Eye operation in Croke Park during yesterday’s All Ireland semi-finals when an early decision in the minor match returned what the official Nuacht Ráiteas would later term “an inconsistency in the generation of a graphic”.

Which translates, essentially, as a total mess.

What happened was as follows. Limerick centre-forward Barry Nash struck what looked for all the world like the first point of the match inside the opening minute. So certain did it seem the ball went between the posts that not only did the umpire reach for his white flag without hesitation but Cathal Tuohy in the Galway goal gave the universal sign for an opposition point by tapping his hurley on the crossbar.

Tipperary referee Fergal Horgan decided that, just to be sure to be sure, he’d send the point for referral to Hawk-Eye, the GAA’s point-detection system newly instituted this summer at significant expense.

Wiped from the board
And while the graphic on the big screen showed the arc of the ball going comfortably through the posts, it was followed by the verdict – written in big old capital letters – MISS. Limerick’s point was wiped from the board and they went on to lose the game after extra-time.

Between then and the senior match the GAA decided to suspend the system for the rest of the day, although it is expected that Hawk-Eye will have had its glitches ironed out by next weekend’s football semi-finals.

Clare went on to qualify for the seventh All-Ireland final in the county’s history with a 1-22 to 0-18 win over Limerick.