Crew delivered a baby, recovered 39 bodies and rescued more than 4,100 at sea 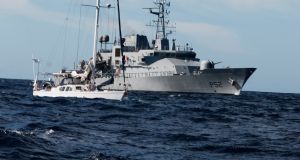 LE Niamh, with yacht suspected of carrying about €80 million euros worth of cocaine after it was stormed by an Irish Naval team 200 nautical miles off Mizen Head. Photograph: Defence Forces Ireland/PA Wire

The Naval Service ship LÉ Niamh, which has rescued more than 4,100 from the Mediterranean, is due to return to Cork harbour on Friday morning. The ship will be met by the newly-appointed Defence Force chief-of-staff Vice Admiral Mark Mellett, who is the first Naval Service commander to hold the State’s most senior military post.

Naval Service flag officer Commodore Hugh Tully will also meet the ship’s commander Lieut-Cdr Daniel Wall and 57 sailors, along with two Army Medical Corps staff, who were deployed on search-and-rescue operations to the Mediterranean in July.

During its 10-week mission the LE Niamh crew delivered a baby, named Destiny, and had to recover 39 bodies in one of over 24 tasks requested by the Italian Maritime Rescue Co-ordination Centre.

The LÉ Samuel Beckett, under the command of Lieut-Cdr Anthony Geraghty, has become the third ship to be assigned by Minister of Defence Simon Coveney to the Mediterranean this year and has taken up duty

This year Naval Service staff have rescued over 7,000 in the Mediterranean.

1 Des Bishop apologises to Traveller community for comments in interview
2 One hundred Irish retailers for all your online Christmas shopping
3 Gym owner plans to defy restrictions and open
4 Miriam Lord: All test and no trace makes Jack, and heaven knows who else, a very ill boy
5 Family settle case over death in hospital of 23-year-old woman
Real news has value SUBSCRIBE