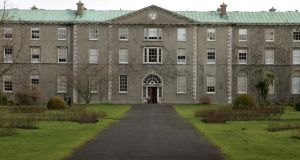 A book of letters and poems written by Nigerian environmental and human rights activist and Nobel Peace Prize nominee Ken Saro-Wiwa has been published by NUI Maynooth.

His brother Dr Owens Wiwa attended the launch yesterday which marked the 18th anniversary of his execution by the then Nigerian military regime.

The book, Silence Would be Treason, last writings of Ken Saro-Wiwa features the private letters written by Ken Saro-Wiwa to Irish missionary nun Sr Majella McCarron (OLA) while he was on death row, as well as a selection of his poems. The letters, smuggled out of his detention centre in bread baskets, document the writer’s transition from political activist to political prisoner, his efforts to protect the Niger Delta, and an enduring friendship with Sr Majella.

The letters also address the growing political instability in Nigeria and the writer’s hopes for peace in Northern Ireland.

The letters were donated by Sr Majella to the university, on foot of NUI Maynooth sociology students’ involvement in environmental campaigning.