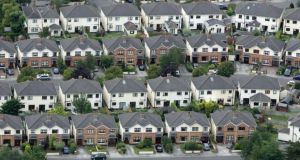 The IPOA has accused the Government of abdicating its responsibilities towards people who need social housing by attacking a soft target instead. Photograph: Frank Miller / The Irish Times

The Irish Property Owners’ Association (IPOA) has accused the Government of abdicating its responsibilities towards people who need social housing by attacking a soft target instead.

The association claimed Minister for the Environment Alan Kelly was unfairly targeting landlords, many of whom were still mired in negative equity and struggling to keep their heads above water.

It warned that what it described as “rent controls” would push more landlords out of the sector and said it was seeking legal advice about the steps it would take.

Most of its members rented out solitary properties, while many were in mortgage arrears and losing money on their buy-to-let investments, the association said. It has a small staff working in a premises on the Navan Road, Dublin. Its chairman is auctioneer Stephen Faughnan, who is also a director, the other being John Dolan.

Margaret McCormick, the association’s information officer, told The Irish Times the new law, designed to strengthen tenants’ rights, may be unconstitutional on the grounds it took from one group and gave to another without providing compensation.

She said 70 per cent of landlords had mortgages on the properties they were renting out, with a similar number saying the annual rental income was less than the annual outgoings. She said that while the private rental sector had a role to play in resolving the current crisis, it was not to blame for it.

Ms McCormick said any potential legal challenge to the legislation “would be extremely costly because you have all the might of the State against you”. She said that while the association was taking legal advice, “there can be no talk of legal action until we have the legislation”.

She also conceded that public opinion was not on landlords’ side.