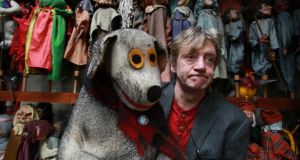 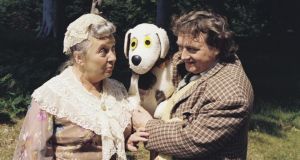 A shot from Wanderly Wagon taken in 1977: Nora O’Mahony as Godmother, Judge the Dog and puppeteer Eugene Lambert as O’Brien. The show ran on RTÉ Television from 1967 to 1982.

Liam Lambert uses his stick to poke at the charred remains of a wooden structure where 16 puppets from the Lambert Puppet Theatre museum collection once hung on display.

The wooden floor is littered with dirt and ashes, while the remains of decades of carefully crafted and designed puppetry is swept into small piles. Glass cabinets which once displayed puppets dating back to the early 1800s have vanished, the puppetry hidden behind panes blackened with soot.

“The puppets are all burnt, destroyed,” says Mr Lambert with a shake in his voice as he walks into his damaged office.

A beam of light falls on a forlorn-looking Judge the dog, covered in dirt and ashes.

“Acidity in the smoke will eat them away over time. Most of the materials are organic, made with leather, and the fabrics made from cottons. They’ll fall apart.”

Shortly after 9pm last Friday, Mr Lambert received a call that his puppet theatre had been set alight.

Dublin Fire Brigade was quick to bring the blaze under control, but not before the flames destroyed dozens of hand-made puppets.

Local gardaí in Dun Laoghaire are investigating what appears to be an arson attack on the building.

The Lambert Puppet Theatre, founded by Eugene Lambert in Monkstown, Co Dublin in 1972, was taken over by his son Liam in 2006, a few years before his father’s death.

The theatre has played a role in introducing decades of Irish children to the arts and theatre, says Mr Lambert.

“We’re in the business of creating happy-children memories. That’s what the reward, is because they’re certainly no financial reward.

“There’s nothing better than the sound of children laughing. When you come out at the end of a show and look down at the audience, you see children and their parents all huddled together in the seats with smiles on their faces. That’s what it’s about.”

“We don’t receive any financial help or grants - it’s purely based on admissions. It’s actually remarkable that we’re still here.”

Despite last week’s fire damage and the large cost of rebuilding sets and dozens of puppets, Mr Lambert and his nephew Jason are determined to keep their family’s contribution to the arts afloat with a production of Jack and the Beanstalk opening this Saturday.

“I want to emphasise that we’re going on. From my experience, if you don’t spell it out to people, you’re gone.

“So we’re re-rigging and will be open on Saturday. I’m going ahead with Aladdin and plan to rebuild it.”

Eugene Lambert’s sidekick Judge the dog first appeared on Irish television screens in RTÉ’s Wanderly Wagon programme, which was broadcast from 1967 to 1982.

Judge went on to become the nation’s spokesman for the Safe Cross Code, teaching children around the State to “look, don’t hurry and listen” before crossing the road.

As the Monkstown theatre’s mascot, Judge always accompanied Lambert on stage to warm up the crowd before shows began. Judge will turn 50 in 2017.

Visit lambertpuppettheatre.ie to help the Lamberts rebuild their theatre