Karen Buckley: Case had appearance of murder inquiry from outset

Scottish police have confirmed that the body that was discovered on a farm in north Glasgow is that of missing Cork woman Karen Buckley. Video: Police Scotland 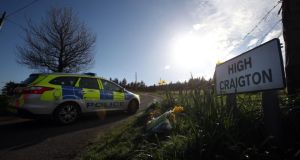 Police activity and floral tributes at High Craigton Farm. The news on Wednesday afternoon that police had cordoned off the farm some 13km north of Glasgow suggested that the investigation team had received important intelligence: Photograph: Andrew Milligan/PA Wire

Police Scotland remained tight-lipped about their investigation from the outset but there had been clues at various stages as to how they were approaching the inquiry.

On Tuesday, Det Supt Jim Kerr said that police were extremely concerned for Ms Buckley’s welfare when he spoke at a press conference to appeal for information about her whereabouts.

Police had identified a man seen on CCTV footage with Ms Buckley outside the Sanctuary nightclub on Dumbarton Road in Glasgow early on Sunday when she disappeared.

But Det Supt Kerr stressed at that stage police were not treating the man as a suspect but simply as a witness who was helping them with their inquiries.

It appears that the young man did tell police that Ms Buckley had accompanied him from the nightclub to his flat on Dorchester Avenue.

He also told them that she left at 4am but when police found her handbag near the entrance to Dawsholm Park, their suspicions about him increased. The man’s version of events about Ms Buckley preparing to go back to her flat in Garnethill in the city centre did not tally with the discovery of her handbag at the park.

In fact, it was in the opposite direction to the route that Ms Buckley should have been taking to go back to the flat on Hill Street in Garnethill that she shared with three other young Irish women.

It would appear that parallel to a missing person investigation involving more than 100 uniformed officers, Police Scotland also had a team of detectives working on the case and making good progress.

The news on Wednesday afternoon that police had cordoned off a farm at High Craigton, some 13km north of Glasgow, suggested that the investigation team had received important intelligence.

There had been a reference at the Tuesday press conference to a grey car acting suspiciously in the area but it is still not clear why officers linked the vehicle to Ms Buckley’s disappearance. Residents in Dorchester Avenue said that police had arrived on Monday evening to tape off a silver car, and they towed it away before Tuesday morning.

Yesterday it appeared that officers had already done quite an amount of forensic work at the hillside farm and had in fact removed Ms Buckley’s remains before confirming she had been found.

Yesterday, The Irish Times learned that a postmortem was taking place at a Glasgow hospital with the results to be sent to the Procurator Fiscal – the Scottish equivalent of the DPP.

No details have emerged how Ms Buckley died. Police divers yesterday recovered a knife from the Forth and Clyde Canal not far from the arrested man’s flat on Dorchester Avenue.

Police asked locals around High Craigton Farm if they had seen any fires in the area on Monday. Fire officers attended the scene on Wednesday.

Although the 21-year-old man is due to appear in court today, many questions remain about what exactly happened to Ms Buckley after she left the Sanctuary nightclub in his company.

When and how she died; what happened to her body between Sunday and Monday; why the car was seen in the High Craigton area – these questions may only be fully answered during a trial process.