Johnny Depp and Cillian Murphy stop off in Westmeath 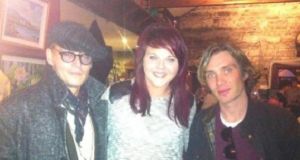 Film stars Johnny Depp and Cillian Murphy caused a stir when they stopped off for lunch in a picturesque Co Westmeath village yesterday.

The Hollywood stars were accompanied by acclaimed author JP Donleavy and film director Bob Mitchell at award-winning Weirs Pub and Restaurant in Multyfarnham.

Co-owner of Weirs, Pat Weir, said it was a normal busy Sunday until Mr Donleavy’s son Philip booked a table for nine for 2.30pm.

“One of the waitresses came in and said you will never believe what is going on, Johnny Depp and Cillian Murphy are here,” he recalled.

Mr Weir had been advised of a possible visit but admitted, “you never believe it till it really happens”.

Although there were 70 people in the bar, he said the celebrity guests were left in peace.

“They were so cool, they were so laid back about it,” Mr Weir remarked. They appeared to enjoy their stay and “even after lunch they had pints,” he said.

“The problem for us was that nobody would leave their tables,” Mr Weir explained.

“Nobody made a fuss till they were leaving.”

As they departed the stars happily signed autographs and posed for pictures. “They are two absolute gentlemen - you couldn’t meet nicer,” said Mr Weir.

“He(Johnny Depp) turned around to my niece and gave her a hug and he said, ‘stay safe my love’. He couldn’t have been nicer — taking time to spell the names properly.”

During the two-and-a-half-hour visit, Cillian Murphy charmed customers and staff and admitted he wouldn’t mind staying a bit longer, while Mr Depp “said the Guinness was fabulous”, according to Mr Weir.

Mr Weir was delighted to see JP Donleavy in the bar again. While his son Philip would visit four or five times a year, the author hadn’t been in a while, said Mr Weir.

It’s understood the party were visiting Mr Donleavy, who lives on the banks of Lough Owel near Multyfarnham, in relation to his novel The Ginger Man.

Their visit has heightened expectations that Depp is eager to bring the acclaimed book to the big screen.

It’s understood Depp is a fan of the book and has been interested in adapting it since 2005.

The Ginger Man tells the tale of wayward American second World War veteran Sebastian Dangerfield, who moves to Dublin shortly after the war to study at Trinity College.

The book was adapted for stage in the late 1950s but its first Dublin run had to be cancelled after just three nights due to controversy caused by the book’s content.

News of Westmeath’s unexpected celebrity visit spread rapidly on the internet yesterday. An online article by journalist Una D’Arcy of the Westmeath Examiner caused the paper’s server to crash on Sunday night.