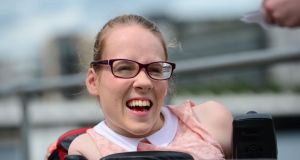 Cork disability activist Joanne O’Riordan has been nominated for an international award previously bestowed upon both John F Kennedy and Henry Kissinger.

Joanne is among the nominees for the Junior Chamber International Ten Outstanding Young People, which honours individuals under the age of 40.

On social media, Joanne said she was “thrilled” with the nomination and “delighted to represent JCI Ireland and JCI Cork.”

The award recognises contributions to local and global communities.

Joanne, born without arms and legs, is one of seven people in the world living with the condition Total Amelia. Her story formed the subject of a 2014 documentary No Limbs No Limits, directed by her brother Steven, who is to run as an Independent candidate in next year’s general election in the constituency of Cork North West.

Known for her outspoken and honest nature, Joanne made headlines in 2011 when she publicly challenged the government on cuts to people with disabilities. Since then she has addressed the UN on the importance of technology in her life and is currently in the process of working with Trinity College to create a robot to help her with everyday tasks.

Joanne has been named among 20 semi-finalists including human rights activists from Ghana, Puerto Rico and Zimbabwe, entrepreneurs from India and Zambia and medical specialists from Singapore and Australia.

Joanne has been nominated for her contribution to children, world peace and human rights.

Her nomination biography states tells how her “extremely rare condition didn’t stop her from carving a future that was both socially inclusive and educationally rewarding.”

“We are thrilled that Joanne has been selected as one of the world’s top outstanding young people and will now hopefully represent JCI Ireland in receiving the award in Japan in November. To ensure Joanne can now go all the way we ask everyone to please vote for her online and ask your friends and family to do likewise before Wednesday, August 19th.”

If successful, Joanne will travel to Kanazawa, Japan to be honoured at the 2015 JCI World Congress on Friday, November 7th.