It’s only a matter of time before Sinn Féin is in government, says Adams 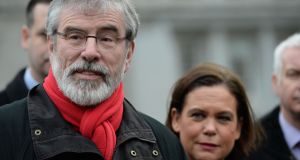 Sinn Féin will be in government, if not after this election then after the next, party president Gerry Adams has said.

“The issue of whether Sinn Féin is in government or not is only a matter of when.

“If we can get a mandate this time and negotiate a coalition deal with other parties, then we will be in government. If not, then if God spares us all, we will run a bigger number of candidates next time out.”

Mr Adams, who was launching the general election campaign of the party’s candidate in Cork South Central, Cllr Donnchadh O Laoghaire, was reluctant to be drawn on how many seats it would win.

“I am not going to speculate on that- it’s the people day - nobody can predict but I have a sense travelling around there is an urgent longing by a certain section to get things done differently.”

Asked about Fianna Fáil leader Micheal Martin’s comments that Fianna Fáil was a left of centre party with a commitment to investment in public services, Mr Adams replied: “I think in fairness, Fianna Fáil historically was the party that got most working class and small farmer votes across the state as a young party in the ‘30s and it drew the same support beyond that.

“But it lost its way with [the former fundraising initiative] Taca and the men in mohair suits in the 1960s and into the 1970s.”

Mr Adams said the current government needed to be “dumped” as it, and particularly Fine Gael, had focused on just one particular demographic and were ignoring large sections of the population.

Cllr O Laoghaire, a member of Cork County Council, acknowledged that he faced tough challenge in getting elected in four seat Cork South Central but he believed it was an achievable target.

“After all that has happened in the last few years with the last two governments in terms of austerity, I don’t think it’s realistic to think the people will return two Fianna Fail and two Fine Gael TDs,” he said.

“Where Sinn Féin is part of progressive alliances on Dublin councils we have delivered for the electorate,” he said.

He said that property tax had been reduced by the maximum 15 per cent for two successive years and vowed that if elected to government, Sinn Féin would abolish the tax in its entirety.

“We have delivered an extra €21 million in funding for homeless services in the City. We have delivered additional money for social housing repairs, for the celebration of the centenary of the 1916 Rising and towards library services.

“Sinn Féin is delivering but local government is limited. That’s why we need a Sinn Féin-led government, with a strong team of Dublin Sinn Féin TDs that will deliver for Dublin,” he said.