Is your name going out of fashion?

The Irish Times Data Blog digs deep into complex data and statistics to generate illuminating information on a wide variety of topics, from baby names to NCT fail rates. 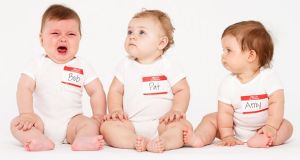 Find out where your name, or the name of a loved one, features in our name-checker below

When was the last time you met a young person who shared your name? Can’t recall? Then there is a distinct possibility your name has fallen from fashion, or that it may be on its way down the charts.

Since 1998, the Central Statistics Office (CSO) has provided annual figures for the top girls’ and boys’ names in Ireland. Following a request from The Irish Times, the CSO provided us with all names given to three or more babies in each year between 2004 and 2013.

On the face of it, the top boys’ names haven’t changed that much in that time with the top five most popular – Jack, James, Daniel, Conor and Seán – all ranking in the top 10 in the decade covered.

Others names have rocketed from obscurity: for example just three Masons were registered in 2004. Fast forward a decade and there were 201 boys with that name.

Outside influences have also had a bearing. EU enlargement and the subsequent increase in the number of eastern European nationals working and living in Ireland saw marked increases in a number of names.

Fewer than 10 boys called Kacper, Jakub or Szymon (the Polish spelling of Simon) were registered in the years up to 2006. In the following years the popularity of these names rose before peaking in 2008/2009 and falling gradually after the recession hit. However, all three remain in the double digits, with 99 Jakubs born here in 2013. Meteoric rise But for every name on the rise there is another on the decline. One example among the boys is Shane who isn’t as popular as he once was: he made the top 20 in 2004 but a decade later he isn’t even in the top 50.

Other once-common names such as Peter, Paul and Padraig no longer make the top 100.

So what about the girls? Well the news isn’t great for Megan and Rebecca, names which used to feature in the top 20 but now fall outside the top 60.

The popularity of names like Shauna, Shannon and Eimear has also dimmed – although all three names featured in the top 50 a decade ago none of them made the top 100 last year.

Fewer than 10 girls born in 2013 were named Elaine, Lorna, Karen or Aishling although the latter name hangs on in the variation Aisling, which fared much better with 132 entries.

On the other end of the scale, Emily may have topped the ranks among girls for the past three years for which figures are available but it is the meteoric rise of Amelia which comes in for special attention in our analysis. Just 53 girls were given the name back in 2004 rising to 429 Amelias born two years ago, making it the fifth most popular girls’ name in 2013.

Similarly, Ruby has shot up from 121st place in 2004 to find herself in the top 20 or thereabouts in more recent times. An average of 320 girls were given this name in the last six years for which figures are available.

Given the changes to baby names in the 10-year period covered by the CSO statistics it is, perhaps, not surprising that the changes are far more dramatic going back 50 years. Popular in 1963 In 2013, alongside its annual breakdown of baby names the CSO also published a list of the most popular names 50 years previously.

A comparison of the two sets of data makes for interesting reading. Take for example a few names which were hugely popular in 1963: Mary, Ann (or Anne), Margaret and Catherine.

Mary was by far the most popular name for newborn girls that year, accounting for a whopping one in eight female newborns while one in every 20 was a Margaret and one in 22 was a Catherine.

Fast forward 50 years and Marys are still with us albeit in fewer numbers than they were – just 79 girls were given the name in 2013 compared to the whopping 3,721 Marys born five decades earlier.

Margaret and Catherine have also stuck around although their popularity has dimmed somewhat; neither name ranked within the top 100 in 2013.

The major change in babies’ names over the past five decades is the diversity of the names Irish people are giving their children. No fewer than 4,643 girls names were registered in 2013 compared to 1,109 registered 50 years earlier, a fourfold increase in the number of names.

This increased diversity is also evident among boys’ name: 3,628 boys’ names were registered in 2013, over five times the number of boys names registered back in 1963.