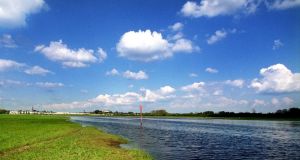 Meadow area on the Shannon near Athlone. Irish Water Safety have warned of risks following death of 14-year-old who had been swimming in the river. File photograph: Bryan O’Brien

Irish Water Safety has made a plea to primary schools to teach basic water-safety skills in time for the summer, following the death of a 14-year-old boy on Thursday.

The teenager was swimming with friends in the River Shannon in Athlone on Wednesday when he got into difficulties, and he later passed away in Temple Street Children’s hospital in Dublin at 2am on Thursday morning.

“We’re only weeks away from over half a million primary school children taking summer holidays and being around all kinds of aquatic environments. We still have time to prime children with the knowledge they need to stay safe,” deputy chief executive of Irish Water Safety, Roger Sweeney, said.

“If schoolteachers even gave 45 minutes to our curriculum and safety tips on iws.ie, between now and the summer holidays, we could see a much safer and enjoyable time being had by children around the country, rather than these tragedies,” Mr Sweeney added.

“The lovely weather that we have now can lull people into a false sense of security.”

Met Éireann have predicted the sunny weather will continue until the middle of next week, with the exception of possible showers in the east and south on Friday and Saturday.

Temperatures are expected to reach the high teens and early 20s at the beginning of next week.