Nirbhasa Magee from Meath will run 3,100 miles in less than two months in New York 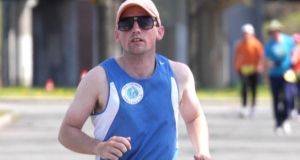 The Self-Transcendence 3,100 mile race is further than running the entire width of the United States of America, and ultra-runner Magee says he will use 12 pairs of shoes during the race.

Nirbhasa will run 60 miles every day from 6am in the morning until midnight around the same half-mile block in Queens, for 52 days starting on Sunday.

The 36-year-old is the first Irish person to attempt the race, which has only been completed by 37 people in the past 18 years since it was set up.

“The main reason I’m doing it is for what happens when I run,” Nirbhasa said. “I really get into these very beautiful states of inner peace and calm, and when you experience those states of meditation it makes all the little struggles and challenges worthwhile.”

Twelve ultra-runners will compete in this year’s road-race and will face many challenges including extremely high temperatures and humidity, running on concrete, and spending long periods of time by themselves without much mental stimulus.

Nirbhasa says that he tries to focus on keeping his mind free of thoughts while he runs, and to focus on staying grateful.

“It’s not all sweetness and light out there, and there are all kinds of issues that you’re faced with. I feel that by having that practice of staying relaxed, happy and grateful, it keeps everything in proper perspective.”

One previous competitor, Suprabha Beckjord, has completed the 3,100 mile race 11 times since the race started, which is equivalent to running the circumference of the earth one and a half times.

The race was founded by spiritual leader and meditation teacher Sri Chinmoy who believed that long-distance running can be a spiritual experience, and can help people overcome their preconceived limitations.

“One of the things you feel when you do these races, and the reason I probably keep coming back to do them, is that you definitely have moments during the race where you realise you’re absolutely on the edge of what you can do,” the Irish runner said. “You really feel like you’re on the total peak of your potential, and it’s a really exhilarating feeling. It feels like you’re scaling the top of a mountain.”

Throughout the race Nirbhasa will burn between 7,000 and 10,000 calories a day, so he will eat every hour as he runs as well as stopping for food at several points during the day.

The County Meath native says he wasn’t always interested in sports, and was more studious when he was younger. He became interested in meditation when he was studying for a degree in theoretical physics in Trinity College, and started running as a method of stress relief and focus.

He began to consider ultra-running several years ago, when he stumbled upon one of the 10-day races in which he later competed.

“It was late at night and I went out into the course, and the people running all seemed to be in this zone of peace and calm,” he said. “I just had this inner feeling that I had to do the race someday.”

He had run marathons previously but then began to train for a 24-hour race in London, before completing two 10-day races in New York in 2013 and 2014.

He began preparing for the race seriously last December, and believes that ultra-running is as much a feat of mental endurance as it is physical.

“You have to be very concentrated and focused the entire time,” he said. “It’s not even so much whether your body holds up; it’s really whether you can discipline your mind.”

Nirbhasa has been living in Iceland for the past year and a half, working as a carer assistant for his friend with motor neuron disease, and will return there after the race finishes on August 4th.

“In our day-to-day life we’ve got so much information coming in, that our mind is in overload most of the time,” he said. “We constantly have this washing machine of thoughts going around, but when you’re out there running, that subsides a little bit and you’re able to go to a space inside yourself beyond the mind.”

“Inwardly I have a very good feeling about the race; I’m looking forward to being out there. I’m just trying not to expend to much mental energy on worrying about what might happen.”

‘Well over 80 trampoline injuries’ in children’s hospital last month 15:19
Cash haul of €700,000 linked to veteran trafficker Mitchell 15:07
Binoculars at the ready: Elon Musk rocket to be seen in Irish skies tonight 14:55
Future of pandemic unemployment scheme to be decided by next government, Taoiseach indicates 14:50
Men suspected of planning murder arrested in Offaly 14:23

1 Trump threatens to ‘close down’ social media companies after Twitter fact-check
2 Sil Fox tells of ‘months of hell’ as he is cleared of sex assault on woman in bar
3 Coronavirus: Denmark is reopening society quickly. How is it faring?
4 Miriam Lord: Leo’s Phoenix pecs just a storm in a bag of cans
5 Cash haul of €700,000 linked to veteran trafficker Mitchell
Real news has value SUBSCRIBE