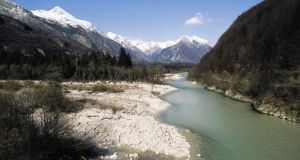 A file image of the Soca river. A young man died on the Slovenian river after encountering difficulty while descending a stretch of rapids in a canoe. Photograph: Getty Images

An Irish canoeist from north Co Dublin has died in an accident in Slovenia.

Conor Keleghan, from Coolmine, Blanchardstown was on an adventure course with the third-level Coláiste Dhulaigh college, based in Coolock, north Dublin.

Mr Keleghan is the second pupil of the adventure sports management course in Coláiste Dhulaigh to lose his life in the last year.

Shane Murphy, of Grange Park, Baldoyle, who was a pupil on the course lost his life when he went kayaking with friends on the Inchavore River in the Wicklow mountains last November.

The trip was not organised by the college, but was an independent excursion put together by the participants themselves.

The second tragedy occured on Sunday when a group of participants on the same course, this time on an official college trip, were canoeing in the Soca river in Slovenia.

The class members arrived in the country on Saturday and were on the second day of their trip.

It is understood Mr Keleghan was an accomplished and experienced canoeist.

He was descending some “whitewater” rapids when he entered the water and his arm became stuck in a rock.

His course mates battled fast flowing water to get to him and performed CPR until medical aid arrived but the young man was pronounced dead some time later.

Participants and staff who are in Slovenia have cancelled their trip and are expected to return to Dublin within the next 48 hours.

The Department of Foreign Affairs confirmed it was providing consular assistance to the family of the deceased young man.

Spokesman Graham Doyle for the City of Dublin Education and Training Board, to which coláiste Dhulaigh is affiliated, said the organisation’s first thoughts were with the bereaved family.

Mr Doyle said the deaths were terrible tragedies and he said the sympathies of everyone also when out to the course participants and members of staff who were still out in Slovenia.

Slovenia is quickly becoming one of Europe’s best known centres for water sports. The country on the Adriatic has some 28,000 kilometres of waterways, around 1,300 substantial sized lakes.